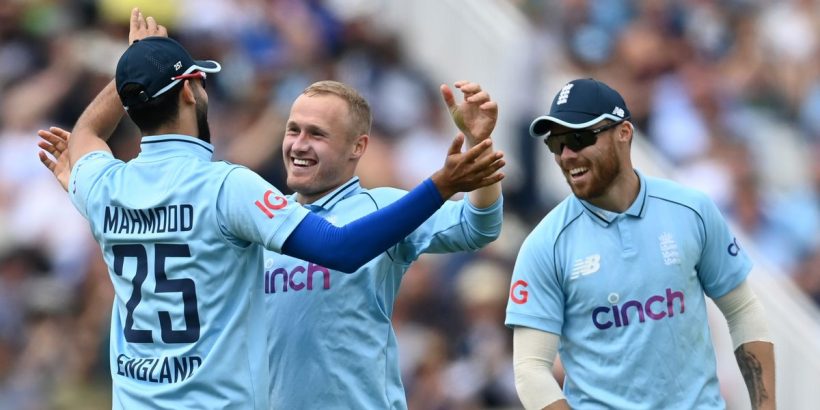 Following an outbreak of COVID-19 within the England squad after the conclusion of their series win over Sri Lanka, England were forced to name a brand-new makeshift squad overnight ahead of their ODI series against Pakistan.

The new 18-man squad included nine uncapped players and was captained by Ben Stokes, who returned to international cricket early after recovering from a finger injury.

England were able to win the series 3-0, naming an unchanged team throughout, and several inexperienced names were particularly impressive.

Several of those players have already been included in England's squad for the upcoming T20 series against Pakistan, with nine stars coming back into the squad after quarantine.

At the start of the ODI series, Mahmood was a relative veteran when compared to the other seamers in the squad, with a total of ten caps for England across limited overs cricket.

The Lancashire star led the attack brilliantly, starting the series by getting two wickets in his first over.

That over set the tone for Mahmood, who ended the series as the highest wicket-taker, getting nine at a seriously impressive average of 13.66.

Former England captain Michael Atherton compared the 24-year-old to Stuart Broad, telling Sky Sports: "He looks like a bowler who can challenge across formats, thinking ahead to the India and Australia Test matches coming up.

"I'm not wishing Broad away at all, he's one of England's all-time greats, but Mahmood looks like the type of bowler who could step into Broad's shoes.

"He offers accuracy, seam movement and a bit of skill with the old ball when it reverses. He is improving, for sure."

Mahmood's displays have been rewarded with a spot in the T20 squad, where he will be hoping to enhance his case further.

Born in Wales, raised in Barbados, nurtured at Sussex and now starring for England, Salt is a fearless, hard-hitting opener in the mould of Jason Roy.

Having already played all over the world in T20 franchise leagues like the Big Bash and PSL, as well as starring for Sussex in the T20 Blast, Salt was well-prepared to make his England debut and he impressed at the top of the order.

After a single-figure score on debut, Salt notched his maiden ODI half-century in the second game, top scoring with 60.

The innings typified Salt's aggressive style, with the 24-year-old throwing his hands at almost everything.

Salt notably struck two glorious boundaries in Shaheen Shah Afridi's opening over, a clear signal of intent, and then took down Faheem Ashraf with four fours in one over.

The presence of Roy and Jonny Bairstow as arguably the greatest ever opening pair in ODIs, plus Jos Buttler's role at the top of the order in T20I cricket, means it will be difficult for Salt to command a regular place in England's white ball squads at the moment.

However, he certainly looks to have a bright future and should feature regularly for England in the years to come.

Stand-in skipper Stokes spoke in glowing terms of his Durham team-mate ahead of the series, saying: "I’ve known Brydon from the academy days and he’s come on over the past few years.

"I’ve been back for four or five weeks at Durham and he’s a seriously-impressive cricketer. He’s known for his bowling but he is a genuinely good batsman as well.

"He’s got pace, that X factor every team wishes they have and I see him in a similar role to the one Liam Plunkett had in the England team for a number of years."

And Carse delivered against Pakistan, regularly hitting speeds of 90mph, taking a five wicket haul in the final ODI and contributing some important runs – sharing a 69-run partnership with Lewis Gregory at Lords and then scoring the winning runs at Edgbaston with a four off Afridi.

England are yet to settle on a replacement for Plunkett, whose wicket-taking ability in the middle overs was key to their World Cup success, but Carse looks a promising option and his performances against Pakistan have certainly advanced his case.

The Lancashire leg-spinner has consistently starred in domestic white ball cricket for his county, particularly the T20 Blast where he has been one of the leading wicket takers ever since making his debut in 2017.

Parkinson made his England debut in 2019 in a T20I against New Zealand but has found his opportunities increasingly limited ever since, in part due to Adil Rashid's presence as one of the world's best.

The 24-year-old was surprisingly left out of the England squad which took on Sri Lanka, with Hampshire's Liam Dawson preferred instead.

However, the COVID outbreak presented him with an opportunity for a run of games at international level and he delivered, taking a total of five wickets at an average of 28.

Parkinson was not afraid to keep tossing the ball up with players looking to attack him, produced an absolute beauty to dismiss Imam-ul-Haq in the final ODI and was more effective than opposite number Shadab Khan.

He has been rewarded with a spot in the T20 squad and, although Rashid is undoubtedly still ahead of him in the pecking order, Parkinson deserves to be considered as his long-term replacement.