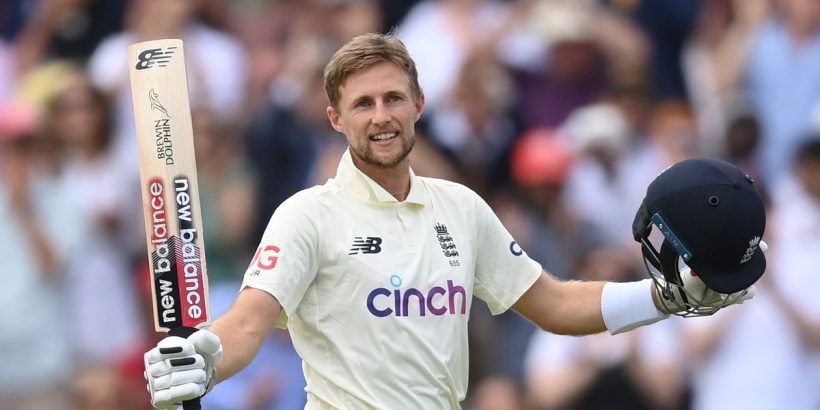 The third day of England 's second Test against India at Lord's ended with the game still hanging in the balance, after England edged into a first innings lead.

England began the day on 119-3, having lost the wickets of Dom Sibley, Haseeb Hameed and Rory Burns on day two.

Captain Joe Root and Jonny Bairstow then shared a magnificent 121-run partnership as they looked to chase down India's first innings lead.

Bairstow eventually perished for 57 after some sustained short bowling from Mohammed Siraj, gloving the ball to Virat Kohli at slip.

Shortly after Bairstow's dismissal, Root reached his second century of the series with a push into the offside, with the 30-year-old breaking multiple records throughout his innings.

Root progressed to 180 not out, but India continued to take regular wickets and England were all out for 391 after James Anderson was bowled by Mohammed Shami on the last ball of the day.

Here are five talking points from the day's play.

Root shows his class once more

After England lost two wickets in quick succession on day two, it was down to Root to steady the ship, initially with Burns and then with Bairstow.

Root went on to make his 22nd Test century for England and equalled Sir Alastair Cook 's record of the most hundreds for England across all formats with 38, having also notched 16 tons in ODIs.

During his innings, Root overtook Graham Gooch to become England's second-highest Test run scorer and he also passed 9,000 Test runs, becoming the second-youngest player to reach the milestone behind Cook.

When England's last wicket fell, Root was left on 180 not out and he has once again shown why he is one of the best batsman in the world right now.

Speaking on BBC Test Match Special, Deep Dasgupta said: "Another magnificent innings. What a knock from the captain. Under pressure, he delivers again. Take a bow. He's unstoppable."

Jonny Bairstow has had a weird Test career so far, with the Yorkshireman managing just 6 Test centuries and averaging a shade under 35.

Bairstow has struggled to find a defined role in this England side, having been played as wicketkeeper and a specialist batsman at times and also batting in every position from number three down to number eight.

The 31-year-old's recall for this series was met with much criticism given he had struggled in England's tour of India in February and March, getting three ducks in four innings.

However, Root aside, Bairstow looked like England's most assured batsman in the first Test as he made 29 and 30 and he managed to build on those starts at Lord's, scoring a half-century – his first in two years.

Following his dismissal, former England batting coach Mark Ramprakash said: "Bairstow played really well and it was an excellent partnership with Joe Root. But it is a big blow and will now expose the lower order to the new ball."

After Bairstow was dismissed, Jos Buttler joined Root at the crease but he did not look comfortable for the majority of his innings and his technique was exposed when Ishant Sharma bowled him through the gate for 23.

Buttler attempted a big, booming drive off Sharma but did not connect with the inswinger and the ball cannoned into the top of off stump.

It was good bowling from Sharma to tempt Buttler into the drive, but it is exactly the sort of shot which Root largely avoided playing because of the risks of getting out.

Buttler is not in the best of form with the bat at the moment, having not passed fifty since England's second Test against Sri Lanka back in January.

Given that he is now batting slightly higher up the order at number six, Buttler desperately needs to make a score in this series.

The return of Moeen Ali for this Test was an attempt by England to balance their side more effectively in the absence of Ben Stokes.

Ali is batting at seven and providing England with the option of an off-spinner, something which allows them to still play four seamers.

Having not played much first-class cricket at all this year, his last game came almost six months ago in February, there was much interest over how Ali would play.

He has come into this Test off the back of some explosive innings in The Hundred and, although it took him some time to find his feet, he largely played fluently and hit four excellent boundaries just before tea.

He ended up getting 27 off 72 but shared a hugely important partnership with Root.

Speaking on BBC Test Match Special, Ramprakash said: "I have to say I have been very impressed about the way that Moeen Ali has gone about his business.

"He has left the ball left. It has been convincing so far. I was a bit surprised he came in below Jos Buttler.

"He has scored double the first-class runs that Buttler has, and he has the temperament to be a top-order batsman."

India were forced to make one change to their team for this Test, with Shardul Thakur ruled out with a hamstring injury.

As a result, India brought in Ishant Sharma as his replacement ahead of spinner Ravichandran Ashwin, whose absence has been a source of debate.

Speaking on BBC Test Match Special, former India captain Deep Dasgupta said: "Virat Kohli won't admit it but in the back of his mind he will be thinking about whether he made a mistake leaving Ravichandran Ashwin out."

While ex-England captain Michael Vaughan tweeted: "Feels like England have picked the right team & India haven’t … Ashwin should have played for India to give them more Batting plus his quality bowling … He bowls well in all conditions …"

Indian legend VVS Laxman, meanwhile, told ESPNCricinfo: "Ashwin gets that variety to the bowling attack, and he has got abundance of experience. So, I am not able to comprehend the reasoning behind this decision."