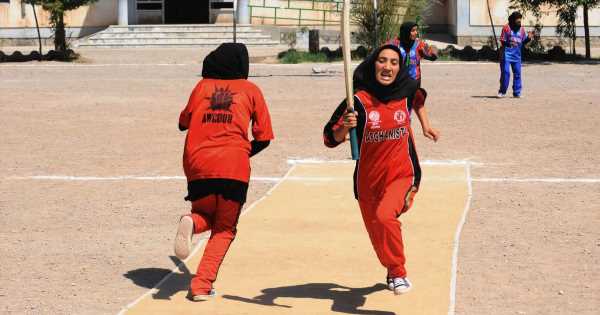 In mid-August, the Taliban retook Afghanistan's capital city Kabul and seized control of the country, following the withdrawal of American troops.

During the last period of Taliban rule, women were not allowed to be educated and the idea of playing sport was virtually inconceivable.

The ACB announced last November that they intended to award central contracts to 25 women cricketers and they are required by the ICC to have a national women's team in order to retain their full member status.

Although the Taliban are yet to make a public statement about the future of women's sport, Shinwari told ESPNcricinfo : "Currently, women cricketers and women cricket staff are in peril."

Shinwari has also previously told BBC Sport : "I think it [Afghanistan's women's team] will be stopped – that is my assumption.

"Women's cricket is pretty new in Afghanistan so I really don't know how much impact it will have on progress in the country.

"It is up to the government to decide and as an employee, we go ahead with the rules and regulations."

The return of the Taliban has prompted some of Afghanistan's women cricketers to flee the county, with Roya Samim fleeing to Canada two days before Kabul fell.

She told the Guardian last month: "The Taliban are against girls studying, so how do they want a girl’s cricket team?

"My other teammates who stay in Afghanistan are afraid, they stay in their houses. They are sad, they ask people to please help us. Emotionally and physically, they are not good.

"We all emailed the ICC but got no response from them. Why do they not respond to us, why do they not consider us, even treat us that we don’t exist in the world?

"After the Taliban came into Kabul, we requested that [the ICC] please save all the girls, we are worried for our teammates. The ACB also said nothing, they said just: 'Wait.'"

A spokesperson for the ICC said: "We are, as you would expect, in close contact with the Afghanistan Cricket Board and we're monitoring the situation and have offered our support."

Another cricketer anonymously told BBC Sport : "Every woman playing cricket or other sports is not safe right now. The situation is very bad in Kabul.

"We have a group on WhatsApp and every night we are talking about our problems and sharing plans about what we should do. We are all hopeless.

"In Afghan culture, there are barriers that affect sport for women. They say that women are weak and are not built to play cricket.

"They have to get married and give birth and work at home and bring up the children. They must take care of their husbands.

"In my family too, some relatives say I cannot play because an Islamic culture will not let a woman play cricket. But I love it.

"The situation is bad for us. But there is hope while we are breathing. If we get taken from the country and taken somewhere else we will start again. We will not give up on our dreams, inshallah [if Allah wills it]."