Australia's new-ball weapon Josh Hazlewood is confident the extraordinary circumstances of this summer will not dull his powers even if it is set to rob the hosts of a massive advantage against India.

As Justin Langer's men prepare for the 50-over leg of its white-ball tour of England, administrators back home are finalising the Test schedule for the bumper Border-Gavaskar series. 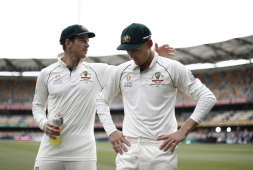 Australia have not lost a Test at the Gabba in 32 years.Credit:Getty

Brisbane had been slated to kickstart the eagerly awaited battle between two of the game's heavyweights but the complexities around planning international cricket in a pandemic has cast that into doubt.

Sources with knowledge of the scheduling plans have indicated Adelaide will launch the series, and is also favourite to pick up the Boxing Day Test if Melbourne cannot host.

Sydney has also expressed its interest for the marquee Test but could also host the fourth Test to go with its traditional New Year's fixture.

If the Gabba does stage a rubber, it will be the fourth Test and not the first. Australia have not lost a Test at the venue since 1988, which is why players were so keen for the series to start in Brisbane.

"Things are out of our control a little bit at the moment. We'd love to start in Brissy; we've got such a great record there," Hazlewood said.

"This year will be a lot different, things will happen pretty quickly with plans and preparations. We love playing in Adelaide, whether it's red ball or pink ball, I can't see a difference there. It's always a great wicket with bat and ball."

The pandemic has thrown into chaos Australia's Test preparations, with senior quicks Pat Cummins and Hazlewood to see little red-ball cricket before taking on India.

The pair are involved in the Indian Premier League, which was moved from its customary start in April to September, and may not get home until mid November if their franchises make the final. They would then need to complete two weeks of quarantine, making them unavailable for the Shield.

Their only match practice could come in form of an Australia v Australia A trial game, similar to that used preceding last year's Ashes.

Hazlewood, however, says one longer-form game will be enough to have him conditioned for the Tests.

"I'm pretty sure we're going to get enough red-ball cricket in before the first Test, whether it's Australia v Australia A or something like that," Hazlewood said.

"I'm quite happy with just the one long-format game. I feel like that's enough for me to get up and running, that's what I've done the last five or six years – played one Shield game and straight into the Test matches."

Australia regained the No.1 T20 ranking with a consolation win, by five wickets, over England in game three of their series.

Aaron Finch’s men knocked off the victory target of 146 after setting up the win through a disciplined and economical bowling performance, reaching the line with three balls to spare.

Mitch Marsh kept his cool when it mattered most, the man of the match unbeaten on 39 after coming in at 4-87 with Australia wobbling in much the same way they did in Friday’s opening loss.

"I loved finishing off the game with Ashton Agar, someone I’ve played a lot of cricket with at the Scorchers," Marsh said.

"We are very disappointed to have lost the T20s but we spoke about gaining momentum for the one-dayers and hopefully this gives us that confidence going into what should be a cracking one-day series."