Licking their wounds from an eight-wicket defeat in the Boxing Day Test, Australian players are also lighter in the pocket after being charged by the International Cricket Council for a slow over rate in their loss to India at the MCG.

Captain Tim Paine pleaded guilty to a charge that the Australians were two overs behind the rate once allowances had been taken into account. 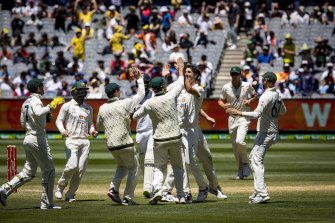 The Australians have been fined for a slow over rate.Credit:Chris Hopkins

Australian players have been fined 40 per cent of their respective match fees and the Aussies have been docked four points in the World Test Championship.

Teams are penalised 20 per cent of their match fee and two WTC points for every over they are deemed to be short.

The four-point deduction is unlikely to have a huge impact on Australia's hopes of making the WTC final given they and India are well ahead in the standings.

"There's a number of things you can do [to speed things up]," Harris said on SEN.

"Financially, you make it [the consequences] bigger for individuals and team members. You can even have penalty runs: give them 15 or 20 penalty runs, or five or 10 penalty runs. Or you just suspend players: start with the captain and vice-captain. Most people like their money so if you're putting big financial fines on each individual player, not just the captain, I'm sure they would be running through the overs a bit quicker."