Cricket Australia's move to make this season's Big Bash League more family friendly for viewers has failed to arrest another decline in crowds with numbers set to drop for a third consecutive summer.

But the governing body said the decrease had been expected after it condensed this season's schedule in order to fit the home and away rounds within the school holidays in response to criticism a year ago. 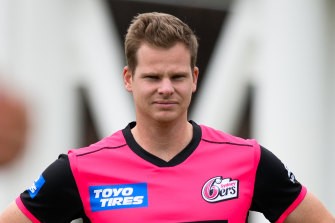 Cricket Australia believes the return of national stars can lift crowds in the Big Bash League.Credit:AAP

CA has blamed the fall in numbers on the increased amount of games before Christmas, which is traditionally a harder time to attract fans, and afternoon fixtures, when more people are at work. The bushfire crisis and drought may also have kept fans away.

The change in scheduling came after complaints from fans the BBL was running too long. This season's league finishes a week sooner, with 61 games across 54 days as opposed to 59 in 61- a change which CA said fans had welcomed. The numbers, however, indicate punters are not voting with their feet.

"To get the season away from a shorter period, we knew the flow-on effects would be those two; amongst other things," BBL boss Alistair Dobson said.

"As we sit here right now, with a big long weekend of matches to come, some really big games at the back end of the season into what we think is a really exciting finals series, we're looking at attendances holistically and we'll have a close look at them at the end of the season."

The drop this summer is more alarming when put against the mean of 30,114 in 2016/17 – numbers which CA conceded may never be repeated again.

The season is now 14 rounds long compared to eight back then, with the increase in games enabling franchises to play more matches in regional venues with lower capacities than stadiums in the state capitals. CA said this move had been a success. The comparison to 2016/17, therefore, is not one of "apples and apples", CA said.

"The different-looking season with 56 games, proudly playing more regional games … means we have a different view of what the most important metrics are," Dobson said.

"We'll work closely with all our clubs and our venues to maximise the crowds. That's something the whole league is passionate about but it's a different dynamic with a different-looking season [2016/17]."

Jolimont was confident fans would embrace the final seven games of the home-and-away season to be staged across the Australia Day long weekend. As it stands, those matches all have a bearing on the finals, which features five teams as opposed to four.

The gap in Australia's international schedule means national players are available for the business end of the BBL, though star trio David Warner, Mitchell Starc and Pat Cummins will not play as they have not signed contracts.

Smith will play his first BBL game for the Sydney Sixers in six years when he faces South African superstar AB de Villiers of the Brisbane Heat.

Officials are hoping for a crowd of about 26,000-30,000 for the clash between two of the game's modern batting greats.