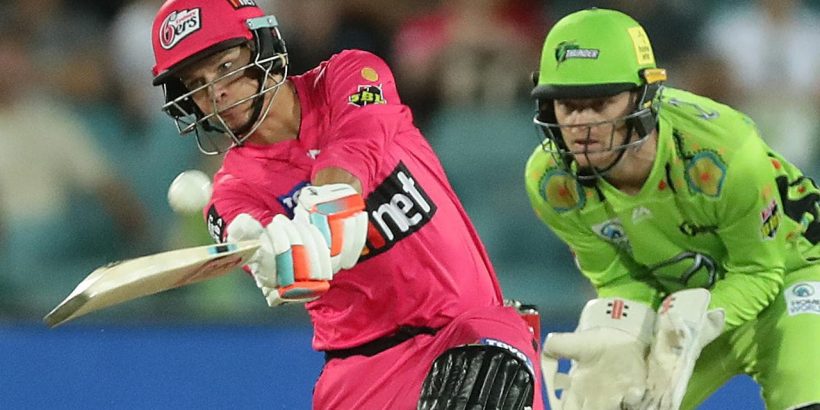 The Sydney Sixers could be left sweating on the Thunder to lift their game to ensure the New South Wales capital hosts this season’s Big Bash grand final.

Six points clear at the top of the table with just four rounds to go, the men in magenta should be preparing to host two playoff matches — possibly including the title decider — but face being shut-out of home because of the heavy-handed border closures that other states have imposed.

Even though the third test against India went ahead at the SCG, the defending BBL champions have still not played a single match in Sydney this campaign with Wednesday’s rain-reduced five-wicket thumping over the Thunder relocated to Manuka Oval.

All of the remaining regular season games for both the Sixers and the Thunder have already been shifted interstate, leaving both sides in the dark about whether they will be allowed to host finals.

It would be a travesty if the best two sides were forced to leave home but Cricket Australia’s hands are tied for now because they are bound by whatever the government rules are at the time.

Tournament organisers have got no other choice than to adopt a wait-and-see approach, but the clock is ticking with the five-team final series due to start in a fortnight.

Under the new format being used for the finals for just the second time, Sydney’s chances of getting the big dances will be greatly enhanced if they finish the regular season first and second — as they are currently placed.

If it stays that way, the two cross-city rivals will play each other in The Qualifier with the winner to host the grand final and the loser to get a second bite of the cherry as host of The Qualifier.

The significance of that is that neither side would have to cross state borders though everything remains up in the air at the moment — including whether the Thunder can hold on to second spot.

While the Sixers are flying, the Thunder have now lost three of their last four matches and are in danger of being overtaken by the Perth Scorchers, who have racked up five wins on the trot.

They failed to capitalise on a lightning start by their big-hitting Englishman Alex Hales — who cleared the ropes three times in clubbing 53 off 33 balls — as Sixers’ spinner and man of the match Steve O’Keefe (3-15) ripped through the fragile middle order.

All-rounder Daniel Sams belted the last ball of the innings to the boundary to reach his half-century but the Thunder’s total of 6-166 was never going to be enough on a good batting strip.

“We’ll finish this tournament without having played at our home ground and a lot of people haven’t seen their family, like every other team,” O’Keefe said.

“We’ve opened up a bit of a buffer but we know that at the back end of the tournament’s you’ve got to be playing good cricket so there’s really no excuse to take the foot off the pedal at the moment, we’ve got to win and get into the finals in good shape.

Big Bash: Josh Phillippe smashed 23-runs of the second over to help set up a comfortable victory for the Sixers over the Thunder in the Sydney Smash….

Big Bash: Josh Phillippe smashed 23-runs of the second over to help set up a comfortable victory for the Sixers over the Thunder in the Sydney Smash.

A mid innings downpour in the nation’s capital saw the target reduced to 129 from 14 overs — which the Sixers made look all too easy, with Josh Philippe, once again, the star.

He took 23 runs off the second over, bowled by Jono Cook, and raced to his fifty off just 24 deliveries.

He finished with 64, overtaking Hales as the leading runscorer in the competition, and was bowled when he swung for the fences with the scores level, before the Sixers sealed victory with eight balls to spare.

At 23, it’s surely only a matter of time before he gets picked to play for Australia.

“He’s a superstar, we see it week in week out from him. He’s already probably the franchise’s best opening batsmen and he’s working hard on his keeping,” O’Keefe said.

“He’s amazing, he plays with such freedom, he plays shots you wouldn’t even dream about, so for him to be firing at the back end of the tournament, it’s important for us to keep that going around now.”