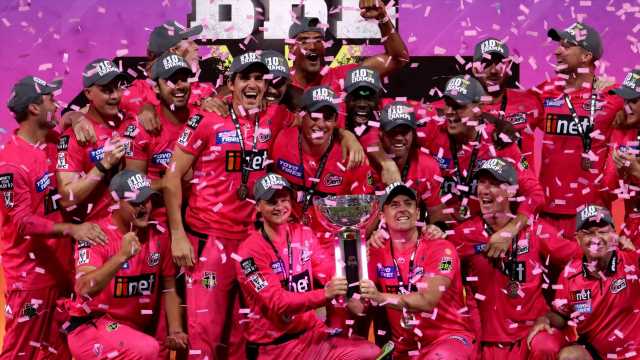 Brett Lee believes Australia should allow private owners to have a slice of the Big Bash, which will be launched on a Sunday next summer by the three-peat hunting Sydney Sixers.

The Sixers have won the last two Big Bash titles and their quest for a third consecutive title will start with a bumper clash against the Melbourne Stars on December 5, falling between the Test against Afghanistan in Hobart and the first Ashes Test.

It is scheduled for the SCG, but nothing is certain in the Covid world.

The Sixers have dominated the competition for the past two seasons.Source:Getty Images

The full Big Bash draw will be announced on Wednesday.

Private ownership was floated when the Big Bash was launched a decade ago but Cricket Australia elected to keep sole ownership of all franchises, unlike the Indian Premier League model which features privately owned teams.

Lee, a former Sydney Sixer, likes the idea of selling just under half of each team to provide a cash injection, which could help attract more of the game’s biggest overseas stars.

“You could have co-ownership and Cricket Australia could retain 51% and still control things, but with that extra funding I think you could get some really high profile stars come out,’’ Lee said.

“I am talking about the Virat Kohli’s. Imagine Kohli playing for the Sixers and the crowds you would get. I am really impressed with the Big Bash. They have done a great job. But to reach the next level that is what you would have to do.’’

CA had plans for an overseas player draft for next season but the increased threat of the global pandemic has the suggestion under a cloud.

Junction Oval will host its first ever Big Bash match next summer as Cricket Australia looks to cram 56 home-and-away matches around a home Ashes series.

It can be revealed that Melbourne Stars are set to play a one-off match at Cricket Victoria’s headquarters in St Kilda, which is likely to precede the marquee derby against Melbourne Renegades at the MCG.

The scheduling crush around what shapes as another blockbuster summer of Test cricket has lent itself to some creative fixturing and BBL clubs will be required to play on consecutive days.

Renegades will also return to GMHBA Stadium in 2021-2022 with the red team expected to play two home games in Geelong and the remaining five at Marvel Stadium.

The heat is on the local BBL clubs with Stars still chasing their maiden BBL trophy and Renegades collecting the past two wooden spoons.

The Melbourne Stars are set to play a one-off game at Junction Oval.Source:Getty Images

Last summer’s games down the highway were relocated due to the pandemic.

Cricket Australia is currently finalising the BBL schedule, which is likely to be released later this week.

The home-and-away season will be completed in just 46 days, although some of those days – such as Christmas Day and some of the day-night Test – will be BBL-free.

That is set to deliver plenty of double-headers.