Former New Zealand international Brendon McCullum has been appointed England Test cricket coach on a contract that will run until the next Ashes series in Australia.

McCullum, 40, had been linked with the job this week before the England and Wales Cricket Board (ECB) made it official on Thursday. 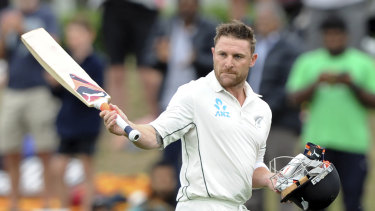 The 101-Test wicketkeeper-batsman will replace Chris Silverwood, who was sacked in February after losing 10 of his last 14 Tests in charge, including a 4-0 series defeat to Australia last summer.

McCullum will begin in time for next month’s three-match Test series against his home nation New Zealand, who he scored 6453 runs for at an average of 38.64 in red ball cricket.

McCullum will leave his role as head coach of Kolkata Knight Riders in the Indian Premier League to try and turn around the fortunes of an England side who have won one of their last 17 Tests.

“I’d like to say how pleased I am to be given this opportunity to positively contribute to England’s Test cricket set-up and move the team forward into a more successful era,” McCullum said in a statement.

“In taking this role on, I am acutely aware of the significant challenges the team faces at present, and I strongly believe in my ability to help the team emerge as a stronger force once we’ve confronted them head-on.

“I’ve enjoyed several robust conversations with [managing director] Rob Key about the direction of travel for the team and have found his enthusiasm contagious. I’m no stranger to bringing about change within a team environment and I can’t wait to get started.

“Ben Stokes is the perfect character to inspire change around him, and I look forward to working closely with him to build a successful unit around us.”

“We were incredibly fortunate to have a seriously strong list of quality candidates for the post, with Brendon demonstrating he was our number one choice,” Key said.

“I believe in Brendon and Ben Stokes – a formidable coach and captain partnership. Time for us all to buckle up and get ready for the ride.”

UK media outlets are reporting McCullum’s deal is for four years, which will take him through until the 2025-26 Ashes series in Australia.

England is yet to name its white ball coach, however, Paul Collingwood is the favourite for the role.