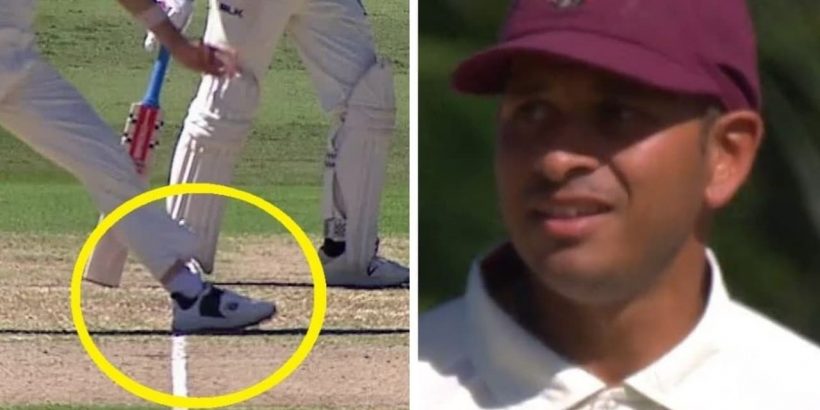 Controversial decisions around no-balls headlined day one of the Sheffield Shield final as Queensland dominated a brittle NSW batting line-up that was torn to shreds.

There was carnage as the Blues slumped to 5-96 then 8/123 after winning the toss but Daniel Hughes could have counted himself unlucky to be among the early victims, caught behind for 19.

The opener started trudging off after edging Jack Wildermuth to Jimmy Peirson but was told to hang around by the on-field official as the third umpire checked for a potential no-ball.

A part of the bowler’s front foot needs to be behind the white crease line when it lands for a delivery to be legal, and replays showed Wildermuth was right on the edge.

Commentators Darren Berry and Andrew Symonds were angling towards a no-ball being called and while ex-Australia coach Darren Lehmann said it “could have been a no-ball”, he thought Hughes would be on his way and was happy for the bowler to be given the benefit of the doubt.

Lehmann was right and the third umpire eventually cleared Wildermuth, reducing NSW to 2/47.

Berry thought Hughes was stiff, saying: “Looks to me like a no-ball. Nothing behind the line.

“For me, there’s nothing behind the line.”

Were the Blues desperately unlucky?Source:FOX SPORTS

History repeated itself in the 47th over when Queensland paceman Xavier Bartlett celebrated Sean Abbott edging to second slip for 13. The Blues all-rounder had almost walked off the ground, before stopping when he was made aware the third umpire was checking for another potential no-ball.

This looked just as close as the first case. While Bartlett’s foot slid forwards a long way, crucially, it’s the initial point of contact between shoe and pitch that umpires take into account when assessing whether it’s a legal delivery or not.

More replays were looked at and this time NSW breathed a sigh of relief as Abbott was given a reprieve.

Former Australian captain Allan Border told Fox Sports: “In my eyes, that’s a no-ball. I can’t build a case the other way.”

Lehmann added: “I think Usman would probably agree with me — the first one isn’t a no-ball but that one probably is.”

Queensland skipper Usman Khawaja wasn’t happy, suggesting the on-field umpire may have missed previous close calls from Bartlett, which made the young fast bowler think his stride had been completely legal all day and he had nothing to worry about.

“So you’re saying he hasn’t bowled a no-ball yet?” Khawaja asked the umpire. “I don’t want him to be stepping over and you not calling it, then he doesn’t know.

Cricket: Was Sean Abbott lucky to stay at the crease after this delivery was called a no-ball?…

Cricket: Was Sean Abbott lucky to stay at the crease after this delivery was called a no-ball?

Matthew Gilkes shouldered arms and was bowled for six before captain and Australian cricket’s forgotten man Kurtis Patterson steadied the ship with 43, only to nick Brendan Doggett behind.

Michael Neser was the chief destroyer, taking three of the first four wickets as the Blues stumbled to 6/121 after 54 overs.

Mitchell Starc (four) and Abott (23) then departed in consecutive deliveries from Wildermuth as he nabbed his third and fourth scalps, reducing the visitors to 8/123 at tea.