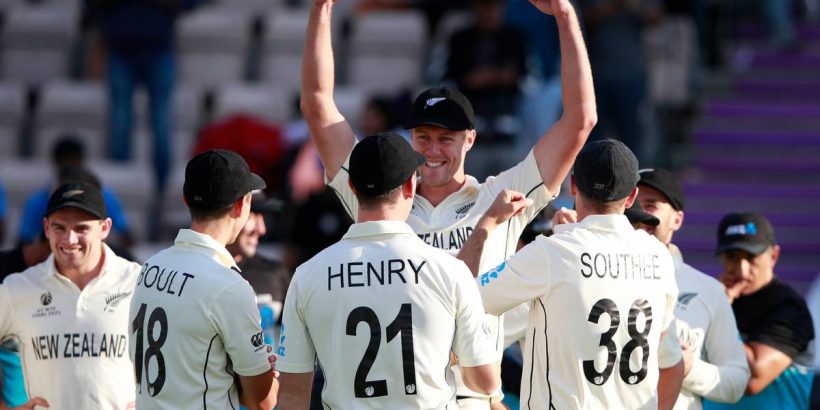 It was around about 5.19am when the apparently obvious finally became obviously apparent.

New Zealand were about to become test cricket champions of the world.

Ross Taylor had just cut a ball from Ishant Sharma hard into the turf. It bounced high over gully’s head and down to the third man boundary where it was fielded as the batsmen crossed for three.

In a day of incredible cricket, of 500 micro-dramas, this was a relatively unremarkable piece of action. It was, however, the moment Indian heads dropped, when their chests deflated and the noise subsided.

The game was up. They knew it. We did too. It felt like an anaesthetic.

There was an element of surrealism in watching the Black Caps achieve this feat while sitting in the cold and dark of a midwinter’s morning. The colour of the clothes and the ball might have been different, but two years ago a lot of these same blokes were poised to do something similar at a famous ground 130km north of Southampton, only for their hearts to be torn from their chests.

So it should have been no surprise that every run on route to their victory target of 139 should have felt like drawing blood. By the time the target was in reach the New Zealanders at the ground or in front of televisions at home and abroad were drained of all colour.

The six-wicket victory looks so routine when written out on paper. It was anything but when played out on grass that had been under water for long periods of time over the past five days.

Even when things looked futile for India, their seamers were beating the bat, smashing fingers and hitting helmets. The spinners were less dangerous to personal health but equally as threatening.

The cricket was so slow and so gripping that, like a good suspense movie, it was often best viewed through fingers.

New Zealand needed a pair of batsmen up for a bruising. They found them in the partnership that has been the foundation stone of New Zealand’s rise from mediocrity to supremacy.

When Ross Taylor joined captain Kane Williamson at 44-2, the ship was not listing but it was starting to take on water.

India were pumped. Virat Kohli was cajoling his bowlers and the mainly Indian crowd and they were responding.

Williamson had just survived being given out leg before to Ravi Ashwin. It was a poor decision and rightfully overturned on review. Devon Conway was not so fortunate, being caught flush in front to the same bowler.

Taylor can be a skittish starter. The Indians knew that. Another wicket right then and they would have been just a couple more good pieces of cricket away from exposing New Zealand’s collection of cultivated boofers and unconventional bashers that starts at No 7 and continues through to No 11.

Taylor knuckled down. He took the sting out the attack. He took most of the strike as Williamson watched on.

He made sure there would be no mortal wounds.

They got lucky, the pair of them. Beaten outside the off stump more times than they could count, they rode their luck and their reservoir of skill and experience.

Williamson reached 50, dropped on the way by the luckless Jasprit Bumrah, and the partnership reached 96 when Taylor – it had to be Taylor – whipped Mohammad Shami over square leg for the win.

When the day started it was no more than a possibility. All the bookies had the draw at short odds.

India had Kohli, but New Zealand had Kyle Jamieson. The Royal Challengers Bangalore teammates came together again and once more it was the bowler who won the battle.
New Zealand would have wanted four wickets before lunch; they got three.

For some there might have even been a sense of relief as Rishabh Pant – given early life by a Tim Southee miscue in the slips – and Ravi Jadeja threatened to squeeze the life out of the match with a sixth-wicket partnership that spanned 33 priceless runs and, more importantly, soaked up 13 overs.

If it continued, those accustomed to near misses and disappointment would be spared the agony of a bum-squeaking run chase. A solid draw, a shared trophy, another less agonising what-might-have-been yarn to discuss with friends had plenty of appeal as the clocks ticked from Wednesday to Thursday.

But this is the price you pay as a New Zealand cricket fan: there is no anticipation without dread.

It was Neil Wagner who made the vital break through. The indefatigable left-armer went around the wicket to Jadeja and peppered him with short stuff. When he finally pitched on in the batsman’s half of the pitch, a weak prod and a fine edge was all he could offer.

The crack quickly became a crevice. Pant batted with an air of mania throughout and the shot he played to get out was emblematic of that frenzy. Charging Trent Boult like he was a left-arm orthodox spinner, he didn’t get to the pitch of the ball but threw himself into the slog. It launched high into the air behind point and Henry Nicholls, running back from gully, took a beautifully judged catch.

Sensibly, one of the cameras stayed trained on Southee. His clenched fists as Nicholls snaffled the spoke to all of us and what it said was: “You can’t pin this on me.”

Nor should we. Jamieson is the shiny new toy – Buzz Lightyear to Southee’s Woody Pride – and Wagner the cult hero who by rights should never have to buy another beer in his life, but sometimes we overlook the guys who have done this longest, even in the days before New Zealand was a machine.

It was Boult and Southee who wrapped up India’s innings with haste. It will be they who determine how long and deep they celebrate this victory. It might be Williamson’s team, but it’s still their dressing room.

Enjoy it boys. Go deep into the night and the next one and the one after that if you want.
Yes, the Black Caps are the world champions.

It’s hard to think of a sentence so worth the wait to write than that.