Ian Chappell does not think it's fair, Glenn Maxwell say it's part of the game – and he has one of the umpires who reviewed laws over the controversial stroke on his side.

One of the game's great entertainers, Maxwell had jaws dropping around the cricket world on Wednesday night after flushing a 100-metre switch hit some 20 rows back into the stands at Manuka Oval. 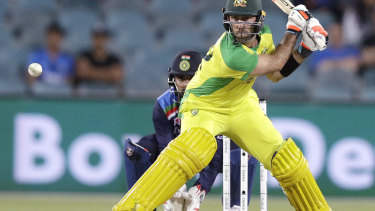 A reverse sweep that travelled 100m for six was a highlight of Glenn Maxwell’s innings.Credit:Getty

Former umpire Simon Taufel, previously a member of the ICC's elite panel, says it would not be practical to outlaw the shot.

"The game of cricket is not a science, it's an art. We're not perfect," Taufel said.

"When we say that we want to ban that type of shot how does the umpire officiate that? It's impossible.

"The umpire has an enormous number of decisions – front foot, back foot, protected area, seeing where a ball is hit – it's impossible to have an official then watch for the changing of the grip or stance. It's an impossible ask for a standing umpire to make that determination

The shot has been discussed several times by the game's lawmakers but no change was made. There have, however, been adjustments to the wide guideline to give some balance back to the bowler.

Chappell does not believe it's fair bowlers must tell the umpire which hand they will deliver the ball but the batter does not if they want to change from a right- to left-hander, a view also shared by Warne.

"One of the main reasons why he's becoming a left-hander is so he can take advantage of those field placings," Chappell told the Wide World of Sports website.

"I'd love the administrators who made those laws, I'd love them to explain to me how that's fair."

Taufel said that rule was in place for the placement of sightscreens, the size of which can vary at grass roots levels.

"When we make laws of cricket we are governing for all forms of cricket all around the world," Taufel said. "Not every ground has the benefit of a 45-metre sightscreen behind the bowler's arm at the SCG."

Maxwell, one of the best exponents of the reverse sweep and switch hit, defended his use of the stroke.

"It's within the laws of the game," Maxwell said.

"I think batting has evolved in such a way that it's just got better and better over the years which is why we're seeing these massive scores getting chased down and scores are going up.

"I suppose it's up to the bowlers to try and combat that, and the skills of bowlers are being tested every day.

"They're having to come up with different change-ups and different ways to stop batters, and with the way they shut down one side of the ground and what-not.

"I suppose the way that batting is evolving, I think bowling has got to evolve to the same stage, so you see guys come up with knuckle bowls and wide-yorker fields and different tactics.

"The tactics of one-day cricket have definitely evolved over the last little bit as well, so I just see it as a different part of the evolution of the game."