Perth: Australia was dealt a savage blow with a potential series-ending injury to Josh Hazlewood as the first Test against New Zealand took an unexpected twist.

The Australians had appeared in control on day two of the clash at Optus Stadium, having left the tourists in the field for five sessions in scorching temperatures, made 416 and then fired out Black Cap openers Tom Latham and Jeet Raval inside two overs to have the tourists 2-1.

However, Hazlewood was then forced from the field midway through his second over – and the fourth of the innings – with a left hamstring strain. He was sent for scans.  The key fast bowler had to abort his run-up on the third delivery of his second over although he may have hurt himself the ball before.

"I would be amazed if I saw him again in this series," former England captain Michael Vaughan said on Fox Cricket, adding teams should have access to an injury-replacement player. 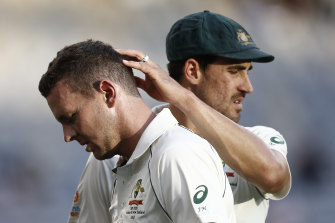 Josh Hazlewood is consoled by Mitchell Starc after injuring his hamstring in Perth.Credit:Getty Images

It was a devastating moment for the Australians, for Hazlewood had begun superbly, dismissing Raval with a gorgeous inswinger.

The Australian followed New Zealand quick Lockie Ferguson (calf), as having left the field in this match because of a leg muscle injury.

Hazlewood was devastated as he trudged from the field, leaving Pat Cummins, who completed Hazlewood's over, Mitchell Starc and Nathan Lyon to carry the load, almost certainly for the rest of the match. Australia does not have a legitimate fast-bowling all-rounder, leaving the medium pace of Matthew Wade and Marnus Labuschagne's part-time leg spin to have to help fill the void.

Hazlewood appears in significant doubt for the Boxing Day Test in Melbourne and the New Year's Test in Sydney. Fast bowler James Pattinson, the 12th man here, is the likely replacement although Queenslander Michael Neser could come into calculations.

The injury soured a fine day for the home side although Travis Head had been under fire from Ricky Ponting and urged to subdue his ego, having been dismissed for 56 when a century was within reach.

Head, 25, deserved some praise but botched another chance to forge an innings of substance that would have rubber-stamped his spot.

Head is rated highly – that he is a joint vice-captain highlights this – but his form has been scratchy since his second-innings half-century in the opening Ashes Test in Birmingham.

He was dropped for the final Test in that campaign but returned against Pakistan this summer, only to make 24 in Brisbane and then not be needed at all in his home Test of Adelaide because of the dominance of David Warner and Labuschagne.

However, his time came on Thursday night, when he made 20 not out, and continued on Friday when he reached 50 for the seventh time but first in eight innings.

He appeared primed for his second Test century but his troubles in converting a good start into a big score resurfaced when he fell for a two-card trick. Paceman Tim Southee delivered a wide delivery in the hope the left-hander would, as he typically does, chase it. He did – and was caught at extra cover.

That sums up Head's Test career to date. He has an encouraging average of 42 in 15 Tests but that was not enough to stop Ponting from taking aim.

"It's one thing to be positive, it's one thing to score quickly. Sometimes you just have to look at the game, look at how the opposition are trying to get you out, sometimes you pull your ego back in as a result of that. He's just let another great opportunity go," Ponting said on Channel 7.

As a scrub fire raged at Belmont Race Course behind Optus Stadium, the Australians looked to make the visitors wilt, particularly as they were missing Ferguson (calf strain) in temperatures that touched 47 degrees inside the venue.

Resuming on 110, with Australia 4-248, Labuschagne did not waste any time in continuing where he had left off on Thursday. He and Head went at better than four runs an over through the opening 40 minutes despite the valiant efforts of bustling left-armer Neil Wagner. But just under an hour into play, Wagner had his third major celebration of the match when, from around the wicket, he dismissed Labuschagne around his legs. It was the culmination of a plan to drag the gum-chewing Queenslander across the crease, through full and short-pitched deliveries.

Labuschagne remains the leading run-scorer in Tests this year, with 972 at 69.42, and is in prime position to become the first to 1000.

The Australians went to tea at 6-337 and had the tourists field for a fifth session, finally falling on the cusp of tea. Skipper Tim Paine had been intent on batting for time but Starc provided some late power hitting to keep the spectators interested.

The robust Wagner and Tim Southee each finished with four wickets, having delivered a combined 67.2 overs.