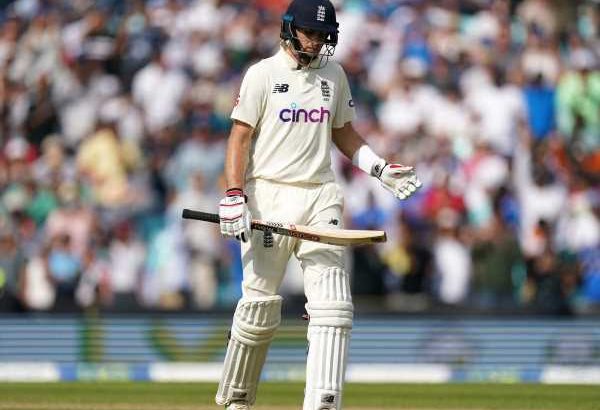 England’s hopes of a record-breaking chase on the final day of the fourth LV= Insurance Test went up in smoke as they lost six wickets in the afternoon session to sit on the cusp of defeat.

Needing to make 368, the biggest fourth-innings chase in their history, the home side were outclassed at the Kia Oval as some high-class bowling left them nowhere to hide at 193 for eight.

After two wickets before lunch the heart was torn out of the chase when they lost four wickets for six runs, Jasprit Bumrah and Ravindra Jadeja wreaking havoc with the classic combination of speed and spin.

Shortly before 10am Surrey announced that the ground was sold out, with ticket-holders pouring through the gates in anticipation of a nail-biting finale.

Initially, at least, they had to settle for a slow burn as India locked down the run-rate with relentless accuracy.

Haseeb Hameed’s response was to retreat into his shell, reversing the easy-going tempo he had established on the previous evening, but Rory Burns added 19 at better than a run-a-ball to turn the overnight partnership of 77 into England’s first century stand of the match.

He was dismissed for exactly 50 before the applause for that landmark had even subsided, nicking Thakur behind as he straightened one up from round the wicket. Burns had left England a strong base to work from but Hameed’s patience soon cracked as he tried to hack his way into a higher gear.

After accumulating carefully to 55, his ugly attempt to swat Jadeja over the top should have been his final act, but Mohammed Siraj produced an even worse piece of cricket as he shelled the simplest of catches at mid-on.

Dawid Malan’s arrival had further cranked up the anxiety levels in the middle, with the left-hander spooked by the rough outside his off stump as Jadeja toyed with him. In the end he was run out for a shaky five, hurried through by Hameed, slow out of the blocks and beaten to the punch by Virat Kohli’s throw.

Moeen Ali had fluffed a similar opening to reprieve Rishabh Pant at a key moment on day four, but India were in clinical mood. They got a sight of Root before lunch but despite Siraj’s best efforts, he was safe at the interval.

England’s chase had stalled at 131 for two, though, leaving another 237 still to get. Root offered a statement of intent by reverse-sweeping the first ball of the afternoon for four, England’s first since Burns’ exit, but things were about to take a sharp and emphatic turn for the worse.

Jadeja, bowling comfortably his best spell of the summer, finally ended Hameed’s resistance with one that pitched outside leg in the footmarks and ripped across the face of the bat. The ball collided with the top of off stump as Hameed groped at fresh air, having scored just 20 runs in 108 deliveries on the day.

Bumrah seized the moment at the other end, picking up his speeds and causing mayhem as he wiped out Ollie Pope and Jonny Bairstow in the space of five balls. Pope allowed one to zip between bat and pad as he was castled for two, before Bairstow had the base of his stumps smashed by an inswinging yorker.

Moeen was spared the same fate, avoiding Bumrah through the dubious method of gifting a bat-pad chance off Jadeja. To all intents and purposes, the game was gone.

Root and Woakes stopped the bleeding to buy their side some breathing space but when the captain stabbed an innocuous Thakur offering into his own stumps they had run out of road. India put the icing on the cake when Woakes sent them into tea with a bonus scalp, pinging Umesh Yadav to short-midwicket.