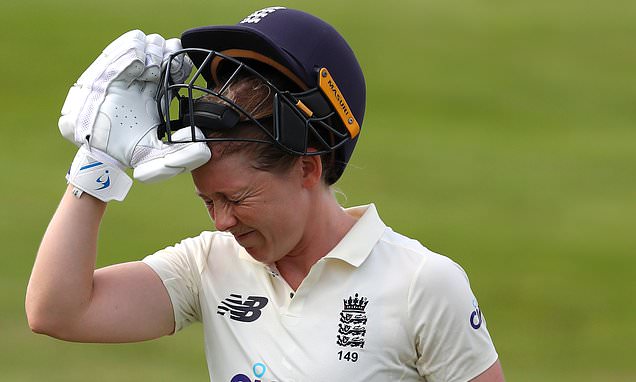 If Heather Knight thinks it is ‘not ideal’ for a rare women’s Test to be played on a used Bristol pitch then it hardly helped her mood to fall five runs short of a century on it.

When Knight, in her 100th match as captain, was moving smoothly towards her second red-ball hundred England were dominating this first Test against India since 2012.

But, from the heights of 230 for two, England suffered the same inexplicable capacity for collapse that tormented the men at Edgbaston last week. 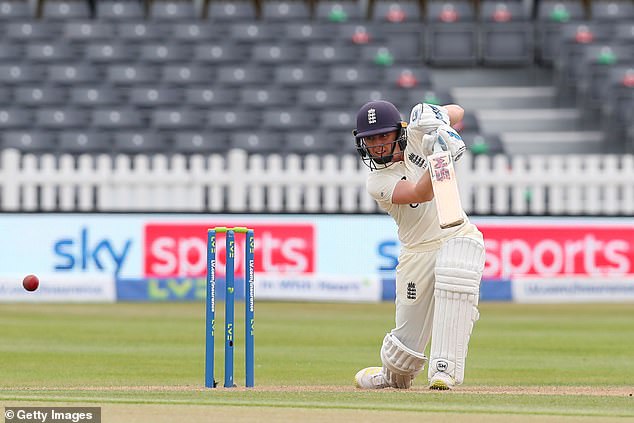 India, sloppy for two sessions of this first day, came roaring back and started to gain the early turn that England feared from a surface used by Gloucestershire last week.

That turn off the dry and slow surface helped off-spin bowlers Sneh Rana and Deepti Sharma claim five wickets between them as England stumbled to 269 for six by the close.

And much will now depend on England’s own spinner in Sophie Ecclestone if Knight’s side are going to make the most of winning an important toss.

Knight and England chose their words carefully ahead of this Test but privately they are livid at being given a tired looking pitch for such a showpiece occasion. 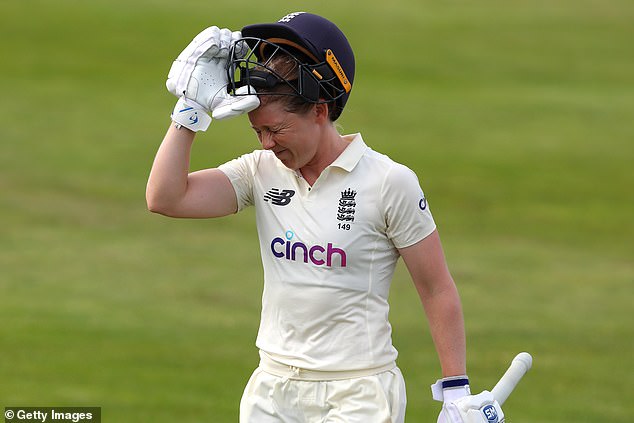 ‘Am I surprised?’ said England coach Lisa Keightley before play. ‘No, not at all. Am I extremely disappointed? Yes of course I am.’

Yet if the captain had survived a marginal lbw shout – Sue Redfern’s decision was found to be umpire’s call on review – then England would have already been in a position to expect the four points that would come with a win in this all-format series.

As it was Knight became the third of four England wickets to fall for 21 runs as India warmed to their first Test for seven years and spun their way back into contention.

That did not stop this being the England captain’s day. Knight first announced herself in Test cricket when she made 157 against Australia at Wormsley eight years ago.

Now the woman who lifted the World Cup in 2017 after controversially replacing Charlotte Edwards as captain was back in white clothes displaying her red-ball skills again. 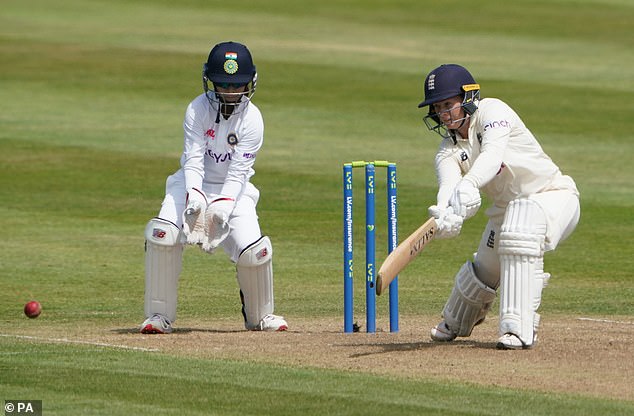 ‘The pitch was a little bit on the slow side but it played OK,’ said Knight afterwards. ‘It would have been lovely to make a century. We were starting to cash in on our hard work and had started scoring more quickly. So I’m super frustrated but if we can get up to 350 we will be in a position to control the game.

‘I think it will take more turn as the game goes on and we’ve got one of the best spinners if not the best in the world so Sophie is licking her lips to see how things progress.’

This provided a good argument for more women’s Tests from the moment Lauren Winfield-Hill hit two sixes in an opening stand of 69 with Tammy Beaumont.

Then, after Beaumont had fallen for 66, Knight and Nat Sciver displayed just the right level of application before lifting the tempo as India began to wilt in the Bristol sun.

But India’s decision to rely on three off-spinners for their slow bowling rather than include a left-armer against England’s plethora of right-handers was justified when the third wicket pair plus Amy Jones and Georgia Elwiss all fell to off-spin.

It needed debutant Sophia Dunkley, the first black woman to play Test cricket for England, and veteran Katherine Brunt to guide them to the close without further alarm. ‘Dunks is a very popular member of our team and massively deserves this chance,’ added Knight.

‘It’s surprising it’s taken so long for a black woman to play Test cricket for England but hopefully others will look at her and think they can be there one day.’