The Sydney Sixers' final hopes are on shaky ground after slumping to their fifth straight loss against the Brisbane Heat on Tuesday afternoon.

The Sixers again suffered in the absence of Ash Gardner, who was ruled out of the match after suffering the seventh concussion of her career against the Adelaide Strikers on Sunday. 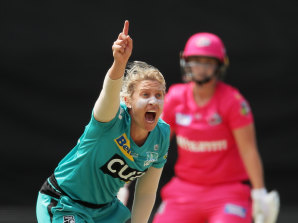 Heat bowler Delissa Kimmince appeals for a wicket during her side’s three-wicket defeat of the Sixers.Credit:Getty

It remains to be seen when the 23-year-old will return to the game, after the Sixers confirmed it is "highly unlikely" Gardner will be back for the Sixers' clash against the Thunder on Wednesday.

The Sixers managed to set up a strong target of 123 for the visitors at Sydney Showground, but the fourth-placed Heat proved too hungry to remain in finals contention with a three-wicket win.

The Sixers' effort was buoyed by the return of Lauren Cheatle, who made her WBBL comeback on Tuesday after 661 days away from the game.

After almost two years off from the league, Cheatle managed a stellar catch to claim the first wicket of the Heat's innings.

Pre-match, Cheatle opened up about her recovery from injury this year and revealed how she was barely able to throw a ball three metres in August.

"There was kind of a patch where nothing was going right," Cheatle said. "I wanted to be ready for some of these [WBBL] games, so to not be throwing past kind of three or four metres in August was a bit confronting."

Cheatle said she told hardly anyone about the session due to frustration over her own lack of recovery.

"I didn't want people to know that I probably wasn't doing so well, from an outcome point of view," she said. "I didn't want anyone else to feel like I needed that extra support.

Instead of getting down on herself, Cheatle said she instead used the session as a motivating tool.

"Soon came a session following that where I could throw 15-20 metres, so it just it turned around," she said. "I don't know if it was an attitude change, or I just realised I could back my shoulder and it could do it."

Sixers coach Ben Sawyer has been Cheatle's bowling coach for seven years and played a "huge role" in the young gun's recovery. 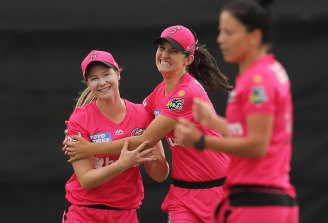 The Sixers’ effort was buoyed by the return of Lauren Cheatle, who made her WBBL comeback on Tuesday after 661 days away from the game. Credit:Getty

"He knows my body and my bowling more than anyone else, so for him to be backing me to play is huge," she said.

Post-game, Cheatle said she was "conflicted" with her emotions – devastated by the loss but ecstatic to be playing once again.

"I'm going to take some lessons out of this game and hopefully have a better trot for the next three," she said.

The Sixers will now face the Thunder on Wednesday in the final derby of the regular season.

"It will be difficult but it is something we are ready for and we don't have a choice anymore," she said. "To get to the finals we have to win."