New Zealand's cricketers have been underdogs from the moment Australia first looked down on them in the 19th century and sneezed, but seldom has any canine been so far under a top dog as New Zealand in their World Cup semi-final against India.

India have it all: more money than all the other cricket boards put together, hundreds of millions of adult males to choose from, and cricket is the only sport in towns, cities, slums and fields. In this World Cup, they topped the qualifying group and lost once. New Zealand have lost their past three games, and their assets add up to not a great deal more than Kane Williamson, good governance, and the few males who do not play rugby. 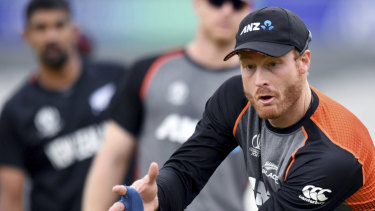 "India are a very successful side and very popular side with a large population and a lot of [television] cameras, which is great," Williamson said deferentially last night. "They bring so much to the sport that we are fortunate to be a part of."

Next, the steely bit. "But it is a cricket match. You do try and simplify things as best you can, as a team, and it does come back to the cricket that we want to play," added Williamson. No mention, of course, that he has scored a third of his team's runs, a higher proportion than anybody else for any country in this World Cup, and would have been averaging well over 100 but for the hand of God, or the fingertips of Mark Wood, that ran him out in their last qualifying game, against England.

And conditions in Manchester on Tuesday night (AEST) might well assist New Zealand more than India. Showers are forecast for the morning, and the pitch will not be a used one that suits India's spinners. In the first of the semi-finals – and so much the better – winning the toss and batting will not equate to winning the game, as it almost invariably did in the second half of the qualifying round. 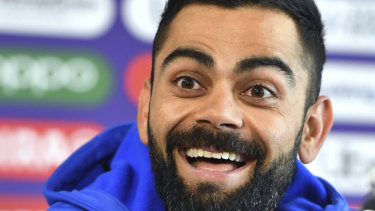 No worries: Virat Kohli speaks to the media ahead of the semi-final.Credit:AP

No cricket-playing country can claim to make more of its resources than New Zealand. This is the 12th World Cup, and this is the Kiwis' eighth semi-final.

Nobody has reached more, and only Australia as many. Only once, though, have New Zealand gone on to reach a final, the last one in Melbourne. This is where they have hit the ceiling: seven or eight top players but never a full XI.

Still, Williamson has an excellent hand of bowlers, if not batsmen, who could exploit the conditions to dismiss India whether they bat first or second.

"Our attack's performed really well on a real variety of surfaces, where taking pace off has been really important, so they have adapted superbly. What we didn't quite expect coming into the tournament was the large variety of conditions that we faced.

"That definitely made, perhaps, batting with any rhythm a real challenge for everybody. A lot of surfaces were 230, 240."

The wash-out of their qualifying match favours New Zealand by making them more unknown. India are queasy enough at the prospect of Trent Boult and Lockie Ferguson to have changed their original XI at the start of this World Cup: no longer can they afford a tail of four specialist bowlers who might not score 10 runs between them.

India are expected to play Ravi Jadeja or Bhuvneshwar Kumar as much for their runs as their wickets. This would be defensive and lend a helping hand, or paw, to cricket's perennial underdogs.