Test paceman Josh Hazlewood has made no secret of his desire to end a four-year absence from Australia's Twenty20 side in time for next year's World Cup in Australia and he will get an opportunity to mount an audition in the Big Bash League after signing with Sydney Sixers.

The Sixers last month announced they had picked up Steve Smith, who is expected to be available for the latter stages of the competition, and the franchise has now also secured the services of Hazlewood after a deal was struck before Friday's deadline for player rosters to be finalised. 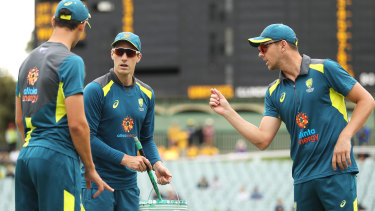 Like Smith, Hazlewood has played for the Sixers before, with Smith rejoining after previously captaining the team to their title in the inaugural season of the franchise-based system in 2011-12. That team also went to win the now defunct Twenty20 Champions League in South Africa, where Hazlewood was their player of the tournament.

While Smith is likely to tour India next month in an unusual January in which Australia do not play any limited-overs internationals at home, Hazlewood was snubbed for the last round of ODIs this year when he missed the World Cup squad.

Hazlewood's signing leaves Starc, Pat Cummins and David Warner as the major unsigned Australian players for this summer's BBL. Warner was the leading run scorer in the Indian Premier League again this year, starring for Sunrisers Hyderabad in a profitable opening combination with England's Jonny Bairstow.

The Adelaide Test triple centurion had been pursued by Melbourne Stars this year but according to sources was unlikely to link with a team.

As reported by The Sydney Morning Herald and The Age last week, Starc has also decided against playing in the IPL for a second straight year.

The Sixers squad also includes Test spinner Nathan Lyon, seamer Sean Abbott, who played a T20 international for Australia against Pakistan in Perth last month, as well as Steve O'Keefe, Josh Philippe and Englishman James Vince. They begin their season on December 18 against Perth Scorchers at the SCG. The captain is former Australia all-rounder Moises Henriques.