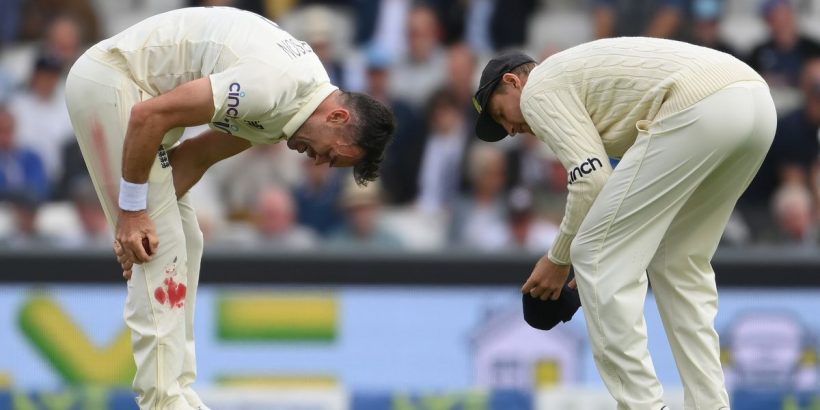 Ketchup seeping through his whites at the kneecap, Jimmy Anderson is not the first England international to give blood for the cause.

Football legend Terry Butcher 's bandaged head and shirt soaked in claret at a World Cup qualifier against Sweden 32 years ago, almost to the day, will always remain an invincible contender for the launderette.

But Anderson's 631st Test wicket – a jaffa to remove Cheteshwar Pujara – was a triumph in his battle of the wounded knee.

The great warhorse, whose four overs with the new cherry had been worryingly innocuous, switched ends – and in his renewed enthusiasm for the task, from one delivery he drew blood around the right knee by taking a tumble in his follow-through.

Like all wounded gladiators, Anderson refused to drop the baton like a hot potato because of a mere flesh wound to the patella.

You say potato, I say patella… for once, Anderson was not England's star turn with the ball, but India's 191 all out vindicated skipper Joe Root 's decision to insert the tourists.

Chris Woakes was excellent on his first Test appearance in a year, while Ollie Robinson – who bowls a 'heavy' ball like 1990s grouch Angus Fraser, without the full teapots – looked the real deal again.

In the beauty contest to find the ugliest Test ground in England, the Kia Oval unveiled its contribution to architectural carbuncles with a three-tier eyesore called the Galadari stand.

As a tribute to half-built multi-storey car parks, it's a sure-fire winner. But at a famous venue where the only blemish on the Kennington skyline was once the gas holder beyond the extra cover boundary towards Westminster, it's a blot on a perfectly good cricket stadium.

Now the twin ugly sisters either side of the pavilion at Old Trafford, and that alien tenement block at Headingley, have serious rivals for oddball construction.

But for horridness, no resting home for concrete and girders can live with the graffiti England's top order keep spraying on a scorecard.

In their determination to give players ample rest during a busy schedule, the think tank at Lord's didn't envisage both openers being back in the hutch with their feet up after four overs.

Not for the first time, Rory Burns dragged on and, after his runs dried up completely on the second morning at Headingley, Haseeb Hameed 's productivity from his last 41 balls faced in Test cricket reads: runs 0, dismissed twice.