Jofra Archer could make his return from a two-month injury lay off by playing for Sussex in the Vitality Blast on Friday.

Although a comeback date was never set when Archer, 26, underwent elbow surgery, it was anticipated he would make his first appearances in the Hundred which starts next week.

However, he has been bowling regularly with his county colleagues at Hove and Mahela Jayawardene, his head coach at Southern Brave, was notified that the England fast bowler could feature in one of Sussex’s final two Twenty20 group matches. 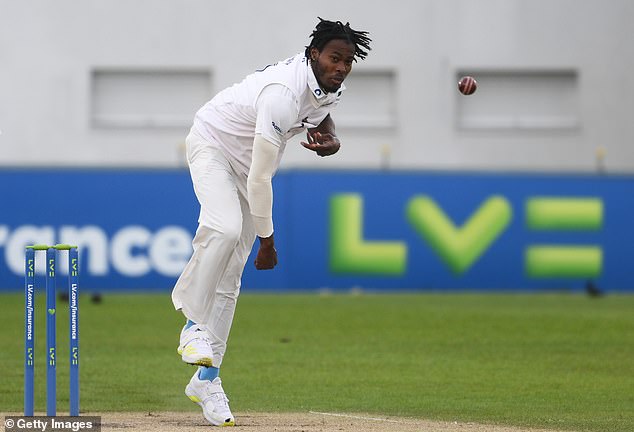 The south coast derby against Hampshire at the Ageas Bowl is followed by another road trip to Kent on Sunday and the squad for both games is set to be named today.

Archer succumbed to elbow pain that limited his participation in his only first-team appearance of 2021 – a County Championship draw with Kent in mid-May.

Meanwhile, Andre Russell will no longer be joining up with the 2019 World Cup winner at the Brave because of international commitments while another West Indies star Kieron Pollard (Welsh Fire) is also out due to injury and Pakistan’s Wahab Riaz (Trent Rockets) has been ruled out by visa issues.

They have been replaced as overseas players by Colin de Grandhomme, Glenn Phillips and Marchant de Lange respectively – all three are currently playing county cricket.

OVERSEAS TO HAVE PULLED OUT OF HUNDRED SINCE FEBRUARY RE-DRAFT

Only 10 of the 24 first-choice overseas players remain