I can’t see me ever giving up! Kent’s 44-year-old all-rounder Darren Stevens will play his 25th season of county cricket next year… but he’s determined it won’t be his last

The ink is barely dry on his latest Kent contract when Darren Stevens reveals that he does not expect it to be his last.

‘Say I have a couple of lean games and it doesn’t quite feel right then I will probably call it a day. But I just can’t see that happening,’ he tells Sportsmail, contemplating a 2021 season in which he will become English domestic cricket’s oldest performer for more than a quarter of a century.

‘As long as I have got the bit between my teeth I am going to keep playing. If I’d played for England, perhaps I would have lost that desire to keep competing at first-class level but I didn’t, I haven’t and I can’t see me ever giving it up.’ 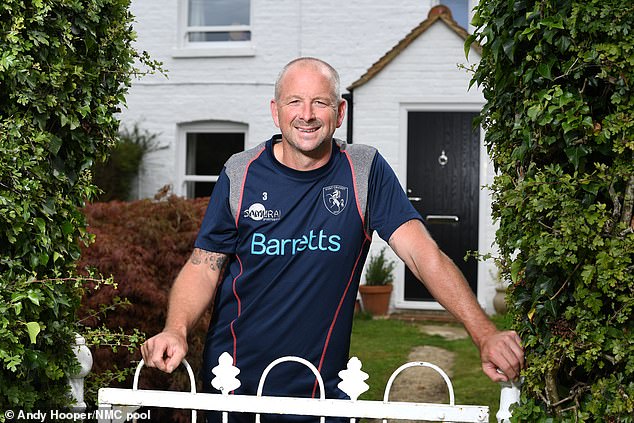 Darren Stevens (above), who turns 45 next April, is cricket’s version of Paul McGrath

For the record, Stevens, who turns 45 next April but says he feels ‘more like mid-30s’ will become the oldest County Championship player since Eddie Hemmings finished with Sussex at 46 in 1995. At the heart of his longevity is partly Kent’s willingness to allow him to be cricket’s version of Paul McGrath. With the cartilage in his knees wearing down, he limits his training and keeps fit by playing.

‘Not being funny but 90 per cent of the time I won’t want to do anything bar basic drills. I won’t be in the nets bowling five or six overs. I might be out there for 15 minutes, then I have a bat and I am done and dusted,’ he says. ‘For me, their management of personnel has been exceptional. They have allowed me to do what feels right for me.

‘Equally, that places ownership of preparation on the person, doesn’t it? If I rock up five kilograms heavier one winter, they’d be like, “Hang on a minute, mate, what’s going on? We give you a bit of a rope and you’re hanging yourself”. So I know there is a responsibility to be in condition to perform.’

Since hitting his 40s, he has followed a bespoke regime planned by Francois Prinsloo, a South African fitness trainer who was a junior Springbok, and does a lot of work strengthening his quads, hamstrings and glutes to take the pressure off those knees. 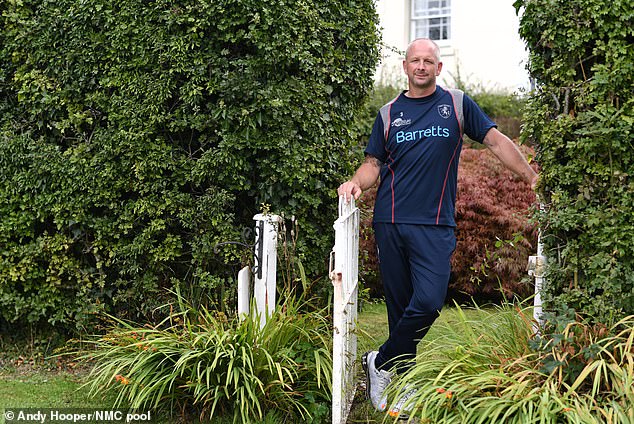 Coincidentally, the contract offer came in the same week that Jimmy Anderson took his 600th Test wicket. The pair were room-mates at the ECB’s Adelaide academy in 2002-03 when Anderson received his England call-up.

A photograph of the duo shaking hands upon the news is packed away among memorabilia Stevens has collected over a career that began back in 1997. His biggest fear of 2020 was that coronavirus would deny him a 24th county summer, let alone a 25th. ‘After all the hassle of last year, with the club telling me I would be finished at the end of the season, I didn’t want that again,’ he says.

‘I suppose my head was in a bit of a mess as I sat at home in lockdown. Don’t get me wrong, I have a very active five-year-old and a two-year-old and we were in the garden every day, keeping active and that was great. But I had lots of chats with my missus in which I said, “I might never play cricket again”.’

Last July, Kent told their veteran all-rounder that it would be his last year at Canterbury, only for one of the most extraordinary performances in Championship history to force a rethink. 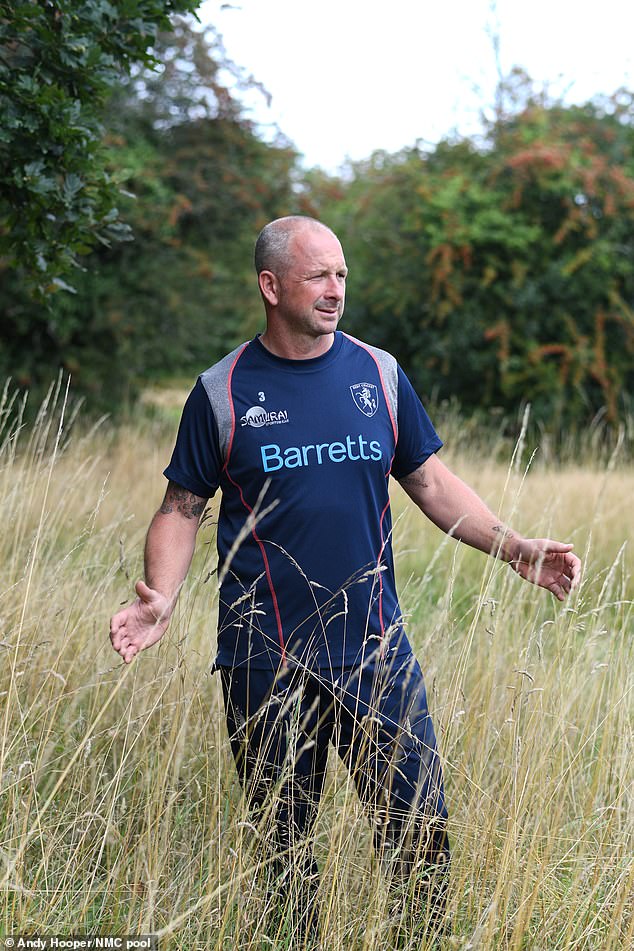 Since hitting his 40s, he has followed a bespoke regime planned by a fitness trainer

Stevens walked to the middle on the first morning of a Division One fixture at Headingley with his team reeling on 39 for five. He went on to hit a career-best 237 at better than a run a ball and combined with Sam Billings in a sixth-wicket stand of 346 — a record for the club and the ground. Then a return of five for 20 in Yorkshire’s second innings made him the oldest player since WG Grace in 1895 to score a double hundred and claim a five-wicket haul in a first-class match.

This year, Kent promised him a 12-month extension on the proviso that he showed good form in the first three rounds of the Bob Willis Trophy. Terms had already been drawn up before he started putting together match figures of seven for 86 in the fourth: a 17-run win over Surrey at the Kia Oval earlier this week.

Not that he is totally happy with his lot right now. A player who featured in five of the first seven Twenty20 finals days and won titles with both Leicestershire and Kent is surplus to requirements for the Twenty20 Blast and is available for loan.

Stevens says: ‘When I was told that I wouldn’t be involved, it didn’t go down too well. I just said, “I have not played for the last two years for Kent and we have lost in the quarter-finals both times — why is that?” 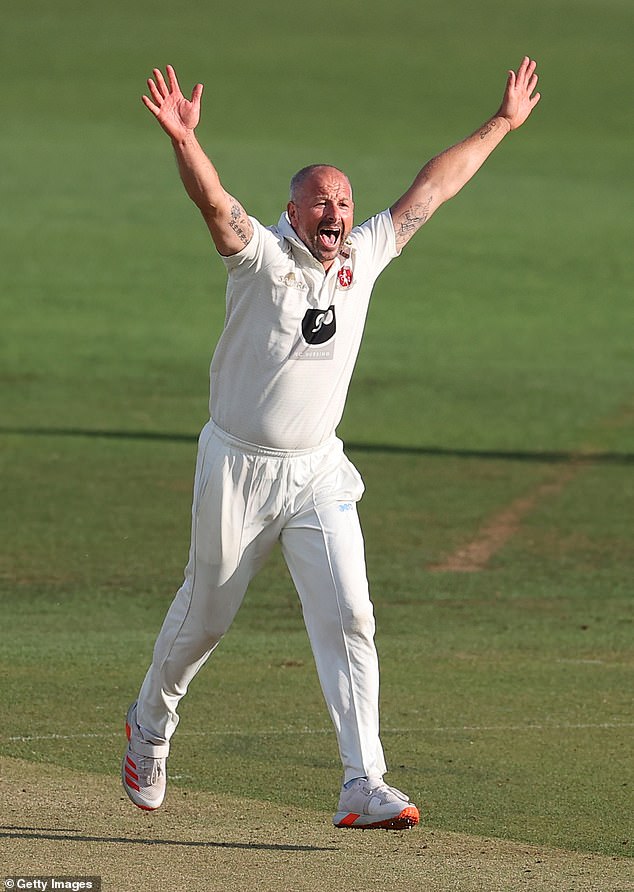 Last July, Kent told that it would be his last year until a remarkable performance at Headingley

‘I have got us over the line for however many years in those sticky situations. I have skill bowling with the white ball and with the bat; I can hit it out the park. It just doesn’t make sense to me. I can understand them wanting to give younger players opportunities but my argument is that Kent is not a development side, is it? It’s OK to be bringing players through but it’s not just about that. If you’re never winning anything, what’s the point?

‘There is always part of me that wants to prove people wrong. But the biggest thing for me? Just winning for Kent. I want another trophy before I finish. That’s the thing that drives me.’

In his youth, Stevens’ contributions were almost exclusively with the bat. He took only six first-class wickets in eight seasons with Leicestershire but has become the scourge of county top-orders with his nagging seam and swing.

‘I thank Rob Key for that. We were involved in an away game against Lancashire at the start of the 2010 season. All I ever used to do then was take the old ball and give the bowlers a rest when they were tired and we were on a flat pitch,’ he recalls. ‘But in this match, he brought me on an over before the second new ball was available and said, “Why don’t you just take it?” I told him he ought to give it to one of the other lads but the game was going nowhere, he insisted, and I got a four-for.’ 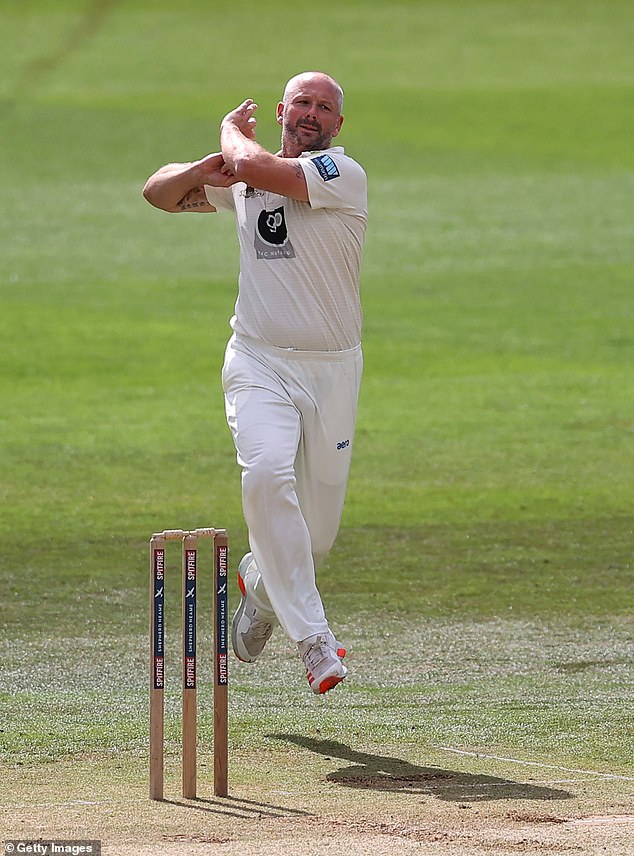 By the end of that season, he began opening the bowling. At the start of the next he claimed his 100th victim. Since the start of 2011, he has taken 443 first-class wickets at 22.56 runs apiece.

Yet even in his 45th year there are butterflies. ‘Last week, I was sat with my pads on, chatting to a couple of the younger lads and I was constantly up and down because Sam Billings was batting and playing like Zorro with about 10 overs to go in the day’ — but once the battle begins, this most likeable of characters is in his element.

Now for the challenge of ensuring his next chapter is not his final one.