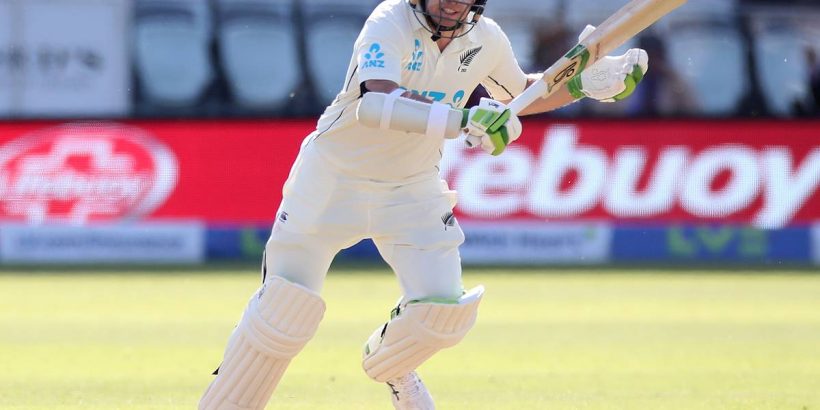 All the action from day five of the first test between the Black Caps and England.

The Black Caps have manufactured a path to victory at Lord’s.

It’s a narrow path, littered with obstacles, and it’s going to require a mighty effort to reach their ideal destination, but it’s a path nonetheless, with New Zealand heading into the final day of the first test at 62-2, leading England by 165 runs.

It’s also a path that could have been much easier to navigate had they not wasted one key moment.

With Rory Burns on 77 and England fighting their way back after a collapse early on day four, the English opener danced down the pitch to a Mitchell Santner delivery, missed the ball, but turned around to huge relief, watching as BJ Watling butchered the straightforward stumping.

Fifty-five runs later, and Burns walked off to applause at Lord’s, having anchored a 63-run eighth-wicket stand with Ollie Robinson (42) and most annoyingly for the visitors, a 52-run partnership for the last wicket with James Anderson (eight not out), dragging his team to 275 all out.

Perhaps asking for a flawless day in the field is too much. After all, the Black Caps had produced a magnificent start to day four after day three was washed out, making the quest for victory possible once again after ripping through England’s middle order.

Having waited for nearly 40 hours to resume his innings, Joe Root was dismissed on the first ball of the day by a brilliant Kyle Jamieson delivery which nipped away and was nicked to Ross Taylor at first slip. After a quick review initiated by Taylor to ensure his fingers were underneath the low catch, Root was on his way, and his teammates were soon to follow.

In 21 balls, England collapsed from 140-3 to 140-6, all at the hands – or fingers – of Tim Southee. Ollie Pope was trapped lbw for 22, before Dan Lawrence (woeful shot outside off, straight to third slip) and debutant James Bracey (bowled ’em) disappeared for ducks.

All of a sudden, England were in danger of missing the follow-on, and a New Zealand victory came clearly into view – until England were slightly let off the hook.

After playing solidly on day two and the opening stages of day four, Burns turned back into what his advanced statistical profile suggests – one of the luckiest batsmen in test cricket.

His stumping let-off on 77 was followed by a dropped catch by Southee at second slip on 88 – the tenth dropped catch Burns has benefitted from in his short test career.

But, lucky or not, Burns made his way through to his third test century, and then rubbed it in, combining with Anderson for a morale-sapping stand that not only dented New Zealand’s lead, but also soaked up crucial time.

Southee eventually dismissed Burns – who has remarkably been on the field for every ball of this test – for 132 to end with a fantastic 6-43, a performance that gave New Zealand a lead of 103, and hope of victory.

That lead extended to 165 by stumps, with Devon Conway and Tom Latham also benefitting from some luck by barely surviving a ferocious opening spell from Anderson and Stuart Broad, before Conway chopped on to Robinson for 23.

Kane Williamson survived a narrow review for lbw before being given out lbw the following ball to Robinson for one, and Neil Wagner joined Latham as nightwatchman to see the visitors through to stumps, navigating a pitch becoming more bowler-friendly by the hour.

While it’s worth acknowledging the slim scenario where the Black Caps collapse and England attempt to slog for a late victory, you’d imagine New Zealand’s plan is to increase their scoring rate before lunch on day five and give themselves two sessions – maybe slightly less – to have a crack at England.

The life and uneven bounce in the pitch will excite the seamers, while Santner also showed signs of fourth-innings promise by beating the bat several times in his 10 overs.

However, their likely stumbling block is the time remaining to take ten wickets, while early forecasts indicate an increasing possibility of rain as well.

Still, many a team have looked set for a draw against the Black Caps in recent years, only to crash to defeat, so the usual qualifier with this history-making New Zealand team comes into play: Unlikelier wins have taken place.

A test victory at Lord’s would be just their second in 18 attempts, so a day five triumph would undoubtedly be a special feat.

Apt, then, that winning this test is going to require a special effort.