It was only a few nights ago when on the couch I flicked over to Fox Cricket, and found one of Dean Jones' typically entertaining one-day international innings, in this case his maiden century, against England at the WACA on New Year's Day, 1987.

Having taken myself down memory lane, I sent Jones a WhatsApp message, for he was in Mumbai, preparing for the remote calling of the Indian Premier League. 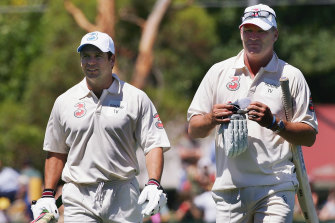 He also took umbrage with the fact that he still remained the last long-term Test batsman (52 Tests) born in Victoria. He mentioned the likes of Matthew Elliott (21 Tests), Brad Hodge (six) and Peter Handscomb (16) but he was right. Why haven't there been more top-order Vics in the Test XI since his final Test in Sri Lanka in 1992?

Jones was never afraid to speak his mind – and that was what made him so likeable, as a reporter and as a cricket enthusiast.

He brought a coolness to cricket in the late 1980s and early '90s, for he had the swagger, the zinc cream, the lifted collar and he was the first to don sunglasses out in the field.

His fitness and running between the wickets revolutionised the sport, although teammates – at all levels – weren't always happy when he treated singles almost like an Olympic 100m final and they were run out. His penchant for looking for a single off the last ball of the over was as endearing as it was frustrating for some.

There is a photograph singed into my memory of him preparing for the 1991 West Indies tour, with Jones in full protective gear of pads, protector, thigh pad, rib protector, helmet and mouthguard. He loved the attention. To this day, I just wish he had scored as many runs in the losing Test series as he had done in the preceding ODI series victory. As a youngster, that was a tour I sweated over, one that I was desperate for Allan Border to win.

Jones' emotions were never far from the surface and a vivid memory was a day of work experience I had with The Age in 1992. I was fortunate to head to the Junction Oval alongside then Sheffield Shield reporter Ashley Browne, with the Vics in action. It also happened to be the day the Test squad for the series opener against the West Indies was announced and that came at lunch. Young dasher Damien Martyn had been drafted in. Jones emerged from the break with his head bowed. Despite the bravado, you could sense he knew his time was up – and so it was.

The highlights and headlines were endless when Jones was in his pomp – from centuries to failures to Ambrose to his dramatic retirement in South Africa in 1994 and the comeback campaign that ensued. He fell out with teammates and officials in part because of his forthright views.

Tired of being overlooked for roles in Australian cricket over the past decade, he made himself one of the best Twenty20 coaches abroad. Jones, like us all, was a flawed character but he had a presence and cut through – something cricket needs more of today.

Mayweather goes on incredible rant about the worrying state of boxing