We’ve got a series. All we need now is to confirm a couple of venues.

Australia always knew they would have their hands full with the Indian captain in this rubber. It’s just that it wasn’t this one. 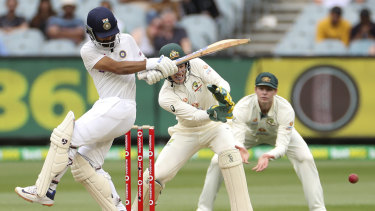 India’s stand-in skipper Ajinkya Rahane at the crease on day two at the MCG.Credit:AP

Ajinkya Rahane might not be as regal as Virat Kohli, but he had already shown himself on Boxing Day to be more intuitive in the field, and now on day two proved himself a worthy batting proxy with a classy, unbeaten century that arrested the 12-wickets-a-day momentum of this series and should find a levelling victory for his team here.

Australia played its neglectful part, spilling five catches. None was easy, but nothing in Test cricket is. That’s its point.

Rahane’s celebration at 100, reached with a rasping cut for four from Pat Cummins, was of a piece with his batsmanship. It was serene, but without undue flourish. He saluted, but gave only the merest of smiles.

Partner Ravindra Jadeja offered a COVID-safe elbow, then thought, dammit, and wrapped his stand-in skipper up in a hug. With 40 not out in a sixth-wicket stand of 104, he had played a crucial part in steering this Test onto a new course. This was their joint venture. 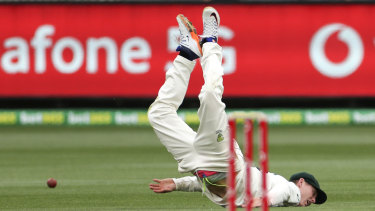 When India visited Australia for four full-strength Tests six years ago, Australia’s captains were Michael Clarke and Steve Smith, India’s Kohli and MS Dhoni. A truce was called at the start of the series following the death of Phil Hughes, but soon the bad blood flowed, and so did the runs.

Smith averaged 128, Kohli 86 and five others 50-plus. Altogether, there were 15 individual centuries. Conversely, only Josh Hazlewood among the bowlers averaged fewer than 30, barely.

This series was becoming yang to that yin. The big personalities are missing or have become ethereal presences. The captains are moderates by nature. Their detente is holding. After such a year, to bicker over cricket would be absurd.

The drop-in pitches for this series are older and therefore more interesting. And the bowlers are, or were, in the ascendant. Here is Test cricket’s richness on display. In this match, each team is playing a multi-skilled, multi-dimensional cricketer at No.6, giving itself the luxury of five front-line bowlers. It makes batting like a rough day in the surf; no sooner do you deal with one than another swamps you. 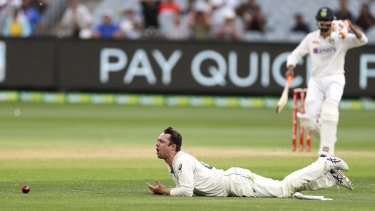 India’s attack is being touted as the best it has sent here. Australia’s frontline foursome will in this match bank their 1000th combined Test wicket. In the normal course of events, they would have on Sunday, and made a start on 2000. Then came Rahane, and a full stop.

On Boxing Day, India’s attack tore through Australia’s brittle batting. On Sunday, the Australian complement threatened to return the compliment. Overcast, muggy and dull even with the floodlights up, the MCG was a batting frying pan to follow the previous night’s fireplace.

Cummins bowled a typically long and handsome opening spell, angling the ball into the right-handers and breaking it away. Hazlewood beat both edges, Cameron Green provided relief, meaning that Paine could keep Mitch Starc and offie Nathan Lyon in his pocket. It seemed a rout must follow. It never did.

At first, the hesitant Indians played slightly inside the line, their speciality, but seemingly opening an avenue to the Australians. But the plays-and-misses, missed. The edges fell short or were dropped.

The first ball of the day was a fruitless DRS review, the last a final dropped catch when a Starc lifter popped from Rahane’s glove onto his helmet, then in a loop to point where a lunging Travis Head held and then watched as it trickled out.

Here was Adelaide in antithesis. There, everything fell Australia’s way. Here, not much did.

On the hour, Cummins chiselled out the overnight batsmen, but the day’s other two wickets came at long intervals. Rahane took 17 balls to break his duck, lulling Australia. Too late, they came to know he had made a long appointment. He doesn’t tower at the crease and he is not the sort to heave the ball far to leg, though he is comfortable with pull and hook.

His forte is the other half of the oval. He made the off side fashionable and then chic with drives and cuts of ever increasing crispness and authority. Altogether, Rahane is neat, which in a cricketer sometimes can be mistaken for meek. It won’t be again.

With and around him, debutant opener Shubman Gill made stylish runs, Hanuma Vihari was patient, Rishabh Pant was characteristically combative and Jadeja played one of those innings that only left-handers can, throwing the bowlers off their lines and angles.

The quicks ran out of ideas, and Lyon’s extra bounce seemed to cause him more problems than the batsmen; only one ball in his first eight overs would have hit the stumps. Australia will have worse bowling days than this for more wickets; that’s Test cricket for you.

The second new ball was from a different batch than the first. Perhaps a spritz of rain and a swirling wind, blowing up into a willy-willy, defused it. This time, it was the bats that swung. Third ball, Rahane toe-ended a catch from Starc to Smith at slip, who appeared unsighted as it burst through his hands.

Smith’s and his Midas touch have become a Medusa who turns all to stone. Here is more of the mysticism of Test cricket. Even when he tried to trap a food wrapper tumbling across the ground in the pre-stumps apocalypse, it eluded him. At least he saw the funny side then.

By then, Green was bowling wide of Jadeja and swinging it wider, as Paine wracked his mind for ideas and for the first time in the series the attack became the defence. Rahane had re-set the contest for the Border-Gavaskar trophy.