Ollie Robinson will discover his fate upon the conclusion of his debut Test match this evening after the ECB promised an investigation into his historic racist and sexist tweets.

Although any probe is unlikely to be carried out by the Cricket Discipline Commission as the Sussex player was not contracted to a club at the time of his inappropriate comments, the conditions of his employment as an England cricketer allow for action to be taken.

That could take the shape of a ban, a fine or a combination of the two. Alternatively, his ECB bosses could decide that he should face no further action, although that course of action remains highly unlikely given chief executive Tom Harrison’s ‘zero tolerance’ response when the news broke on the first day of Robinson’s international career. 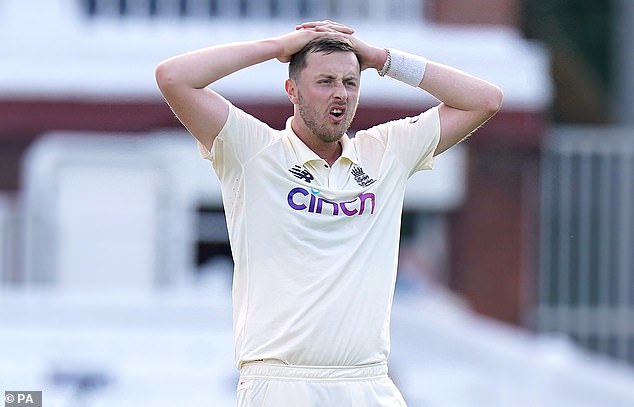 Ollie Robinson may be playing in only his first Test but he certainly had World No 1-ranked batsman Kane Williamson’s number at Lord’s.

Williamson is hit on the pads with the second ball of the 24th over. Robinson appeals and umpire Richard Illingworth raises his finger. Williamson reviews reluctantly. Ultra Edge spots a tiny murmur as the ball passes the bat and Williamson survives.

With the next ball, the England bowler again hits Williamson’s pads. This time Joe Root isn’t convinced when umpire Illingworth turns down Robinson’s leg before appeal but eventually, almost reluctantly, signals for the review. Replays showing three reds, the ball hitting the top of leg stump.

The likelihood is that the 27-year-old will be removed from the squad for the second Test starting at Edgbaston on Thursday.

Sportsmail understands that plans were being made on Saturday to add an extra seamer to the party travelling to Birmingham.

Lancashire’s Saqib Mahmood and Brydon Carse, the Durham pace bowler who made a strong impression on England Lions’ tour of Australia last year and has rekindled his best form with 33 Championship wickets at 20 runs apiece so far in 2021, will be among the names mulled over by England coach Chris Silverwood and his selection team.

On the field, Robinson followed his four first-innings wickets with a composed innings of 42 from number eight on the fourth day of the Lord’s Test — only centurion Rory Burns contributed more to England’s 275 all out — plus the scalps of first-innings double centurion Devon Conway and Test cricket’s number one-rated batsman Kane Williamson.

However, he is once again set to suffer for his indiscretions as a teenager as the ECB make an example of him in their bid to rid the sport of discrimination.

The episode has been a particular source of embarrassment to them because the tweets were unearthed within hours of the England team taking to the field pre-match sporting t-shirts carrying messages against racism and sexism.

The unsavoury comments date back to a period ending in June 2013 when, as an 18-yearold, he was trialling with Yorkshire following release from Kent. He made his second team debut that month. ‘Ollie Robinson signed a junior professional contract with Yorkshire on September 19, 2013 before leaving in July 2014, playing three List A and seven T20 matches,’ said a Yorkshire spokesperson in response.

‘The club was unaware of these posts on Ollie’s social media channel s before he signed and strongly condemn such comments. There is no place in our society or in our sport for racism or sexism.’

The association will be uncomfortable for Yorkshire, who are being taken to an employment tribunal on a race discrimination claim by former player Azeem Rafiq. 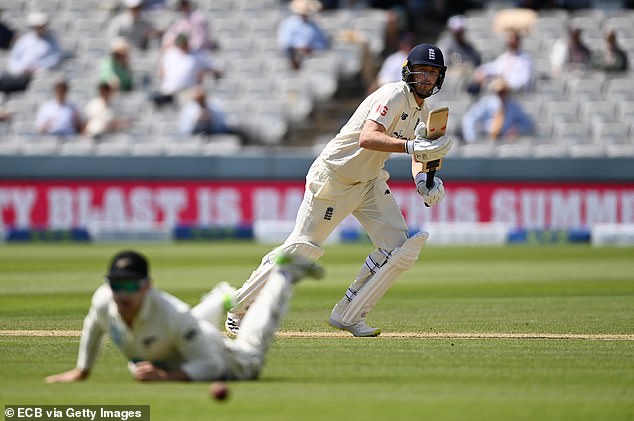 Robinson was sacked after less than a year at Headingley due to a breakdown in trust following poor time keeping, which exposed inappropriate long-distance trips back to Kent between matches.

This year he was subject to virtual classrooms on unconscious bias, diversity and inclusion put on by the Professional Cricketers’ Association but run by the EW Group, specialists in the field.

A likely part of his punishment from an organisation desperate for the outside world to take its message seriously will be a further individualised programme.