Former Australia star Alex Blackwell hopes James Faulkner's "perceived coming out" is a sign that the first male star to genuinely do so will be given "overwhelming support" by the country's sports fans.

Cricket Australia issued a statement on Tuesday supporting Faulkner over a misinterpreted social media post that led news outlets to report the World Cup winner was in a same-sex relationship.

Faulkner wrote on Instagram that he was out for "dinner with the boyfriend" and added a hashtag of "together for five years", alongside a photograph of his mother and Rob Jubb.

He later issued a statement, saying Jubb was "just a great friend" and the night was to mark five years of being housemates. He said the confusion was a "misunderstanding".

Former internationals Brett Lee, Shaun Tait and Isa Guha were among those to express their support for Faulkner on social media. Faulkner, however, was also criticised for making light of a serious issue in the gay community.

Blackwell, a World Cup and World T20 winner and current Cricket NSW board member who married her wife in England in 2015, said Faulkner's post would be in "very poor taste" if made as a "joke to deliberately mislead and make light of same-sex relationships".

"If the post wasn't intended as a joke I think it shows how easily a person can mislead by their comments on social media," Blackwell said.

"The response to this perceived coming out of a male role model in sport was overwhelmingly positive.

"I hope that this means that when we do see a genuine coming out story for a male professional cricketer in Australia, that there will be nothing but overwhelming support.

"While an athlete’s sexuality should not be a newsworthy story, unfortunately it will be because openly LGBTI people are under-represented in sport, especially for men, which is understandable while homophobia in sport remains alarmingly common. 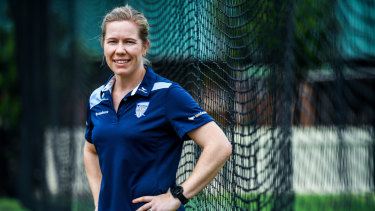 "I have seen first hand the great work that Cricket Australia does to ensure all cricketers feel welcome and free to be all of who they are on or off the field. I continue to support CA's efforts in particular regarding LGBTI inclusion."

Former England wicketkeeper Steven Davies is the only male international cricket to have declared he is gay.

Faulkner said it was "fantastic" to see the support for the "LBGT (sic) community".

"Let’s never forget love is love, however @robjubbsta is just a great friend. Last night marked five years of being house mates! Good on everyone for being so supportive," Faulkner wrote.

CA issued a statement, suggesting the misunderstanding was a result of media outlets not contacting Faulkner for clarification.

"Cricket Australia does not consider the social commentary this morning from James Faulkner to be a joke, nor does James," CA said.

"His comment was made as a genuine reflection of his relationship with his business partner, best friend and house mate of five years. He was not contacted for clarification before some outlets reported his Instagram post as an announcement of a homosexual relationship.

"James and CA are supportive of the LGBQTI community and recognises coming out can be an incredibly emotional time. The post was not in any way meant to make light of this and, though the support from the community was overwhelming and positive. Cricket Australia apologises for any unintended offence."