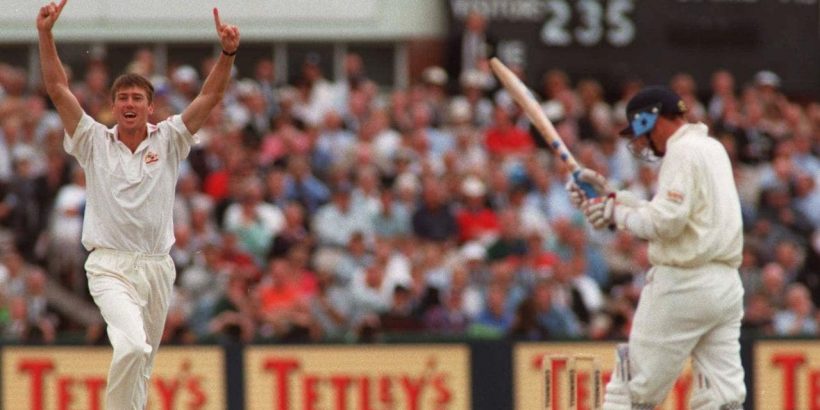 Former England captain Mike Atherton has spoken of the “gremlins’’ he confronted in facing nemesis Glenn McGrath as he nominated the key wicket set to shape the destiny of the Ashes.

Speaking on Fox Sports’ Road To The Ashes podcast which spotlighted Australia’s 3-2 victory in the 1997 Ashes in England, Atherton reflected on his jousting with McGrath who dismissed him 19 times in Tests, the most for a bowler against the one batsman.

“It’s interesting because at this point (in 1997) the nightmares were not there,’’ Atherton said.

“We had seen not that much of Glenn McGrath at that point. I had only played him a couple of times. It was from 97 onwards he had my number completely.

“I found him tough because he was quite sharp early (in his career) and the difficultly for me I found was that he got so close to the stumps.

“If I had a weakness I would block myself off a little bit with my footwork. With him coming very tight to the stumps it opened up little gremlins.

“McGrath and Warne together was a tough combination, I was the type of batsman who did not take bowlers apart. I trusted my defence and waited on bad balls a try and grind it out. But you did not get many bad balls with those two. Pressure just sort of built and built.’’

Atherton believes for England to win next summer’s Ashes in Australia they must not let David Warner escape from the hold that Stuart Broad had over him last series in England when Broad dismissed Warner seven times to restrict him to just 95 runs for the series.

Cricket: Mitchell Starc and Josh Hazlewood have put in an all-time partnership bowling effort as they ripped through the opening order of the West Indies….

Cricket: Mitchell Starc and Josh Hazlewood have put in an all-time partnership bowling effort as they ripped through the opening order of the West Indies.

“You have bankers in Smith and Labuschagne – two fantastic players – and Warner is the other player with the great record.

“Clearly with the Kookaburra (ball in Australia) it is wholly different than a Dukes ball in England and he is a great player but he is 34 and not many people don’t get much better after 33.

“There will be a bit of pressure on him in those opening two games and if England can get him out cheaply and open the door to some of those doubts it leaves Australia’s batting very heavily reliant on Smith and Labuschagne.’’

Atherton said that England’s fast bowling was stronger than its batting and that veteran swingman Jimmy Anderson, who turns 39 next week, was bowling better than ever but would not play every Test.

He conceded England’s wobbly top order was a worry but said recent English summers have been extremely demanding for batsmen.