Fears cricket would be left without free-to-air coverage and completely behind a paywall during the game's broadcast war have been allayed after it emerged Seven would televise matches while its dispute with Cricket Australia was ongoing.

The first international of the Australian season is 10 days away, with the New Zealand women's side already in the country and quarantining in Brisbane ahead of six matches in Queensland against Meg Lanning's World Cup-winning team. 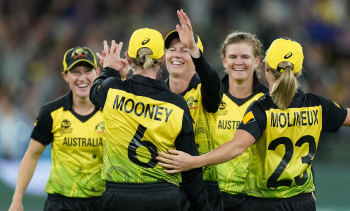 Meg Lanning’s Australian team will turn out in Brisbane for the first time since winning the World Cup.Credit:AAP

That T20 and ODI series will be followed by the Women’s Big Bash League, played exclusively in Sydney from mid-October.

Seven’s serving of CA with a breach-of-contract notice and its intention not to stump up the $25m instalment it is due to pay on Tuesday had prompted concerns the game would be stranded without a free-to-air partner as the season began. But a network source said on Sunday the broadcaster would continue to show matches until the point its $450 million contract was terminated.

If that is the ultimate outcome, it is potentially months away, with mediation and arbitration ahead for Seven and CA should a deal such as a reduction on the media company’s $82 million rights fee not be found.

Amid the feud, it appeared business as usual on Seven on Saturday night as married Australian internationals Mitchell Starc and Alyssa Healy appeared via video hook-up on the network’s pre-game AFL coverage from Manchester and Brisbane respectively.

Starc is in England with the Australian limited-overs squad while Healy has been in quarantine in Brisbane for the women’s series against New Zealand there.

CA executives and officials from the Board of Control for Cricket in India, meanwhile, spoke via Zoom on Saturday night about the upcoming tour of Australia by Virat Kohli’s India team.

The delay in the announcement of the revised dates and venues for the T20, ODI and Test series between Australia and India has contributed to Seven’s frustration. According to a CA source, it is imminent and simply awaiting the sign-off of state governments.

The question to be determined is where Kohli’s men will spend their quarantine period once they arrive in the country in November, with Adelaide and Brisbane the options.

Adelaide is where eight members of the Australian team in England, Starc among them, will spend their two-week quarantine period upon re-entry to Australia on Friday, with the rest of the squad flying directly to the United Arab Emirates to play in the relocated Indian Premier League.

A media report out of India on Sunday claimed the T20 and ODI games between Australia and India preceding the four-match Test series could be staged in the UAE, where most of the players on each side will be for the IPL, and not in Australia.

Based on CA’s reaction to the report, however, there is more chance of Kohli playing for Australia than those matches being played in Abu Dhabi and Dubai.

Those T20s and ODIs are exclusive to Foxtel under CA's $1.18 billion broadcast deal.