Match-winner Ash Gardner has called for the decision review system to be used for all bilateral women's series after Australia benefited from line-ball calls in their victory over New Zealand on Saturday.

Gardner and star seamer Megan Schutt powered the hosts to a 17-run win in the first international game of the season, but the result could have been different if video technology had been available.

The reigning world champions can claim the series with victory at Allan Border Field on Sunday, but will be without superstar all-rounder Ellyse Perry, who has suffered a minor setback in her recovery from hamstring surgery. 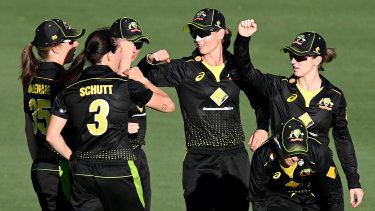 Australia won the key moments but had fortune fall their way with the bat and the ball at important stages of the game.

The White Ferns were convinced they had Nicola Carey caught behind first ball off the bowling of Sophie Devine. Though the sound effects microphone picked up a large noise as the ball passed the bat, umpire Donovan Koch was unmoved, possibly because he could not hear the sound in the blustery conditions.

Had the call gone the Kiwis' way, Australia would have slumped to 6-83. Gardner was in no doubt the wrong call had been reached, while Carey's grin suggested she knew she had been fortunate.

"And all the Kiwis were giving her a bit of stick. You only walk if you're given out … She looked guilty as charged."

DRS is not used in this series but Gardner said it was time for it to be mandatory in all women's games. 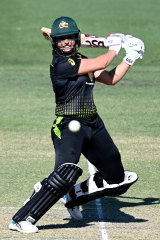 Ash Gardner cuts on her way to a watch-winning knock.Credit:Getty

"Where the women's game is going there should be no reason [not] to use that technology if it's there," Gardner said. "Probably in the next one to two years that's something that will definitely be adapted all around the world."

Devine was again on the wrong end when she was adjudged to have been stumped by a nifty piece of glovework from Alyssa Healy, who aborted an appeal for caught behind to take the bails off.

Replays did not appear conclusive as to whether Devine's foot was still in the air, but video umpire Michael Graham-Smith sent her away for 29.

Devine refused to blame the decisions for her team's loss, saying her team needed to capitalise when they had Australia under pressure.

Gardner saved Australia with the bat with a knock of 61 off 41 balls, which mixed skill, power and smarts and was a deserved recipient of the player of the match award.

With the game on the line in the closing overs, Schutt ran through New Zealand's middle order with a clinical performance at the death.

The world's second ranked bowler finished with the stellar figures of 4-23, her double strike in the 18th over when she removed Katey Martin and Suzie Bates denying the game a close finish.

The Australian top order failed to adjust to a two-paced pitch, which can be tricky to play at the best of times, let alone after such a long break, losing their wickets attempting to hit over the top.

Twice Australia were under pressure, during the first powerplay, then in the middle overs, but this side boasts considerable depth with the bat.

Gardner has a licence to thrill in this side, but had to rely on her nous to get her team out of a precarious position before being able to unleash her power.

Cow corner was a productive zone for her while her inside-out cover drive off Hayley Jensen would sit well on any star player's highlights reel.

Renault and Daniel Ricciardo: From underachievers to an F1 2020 force