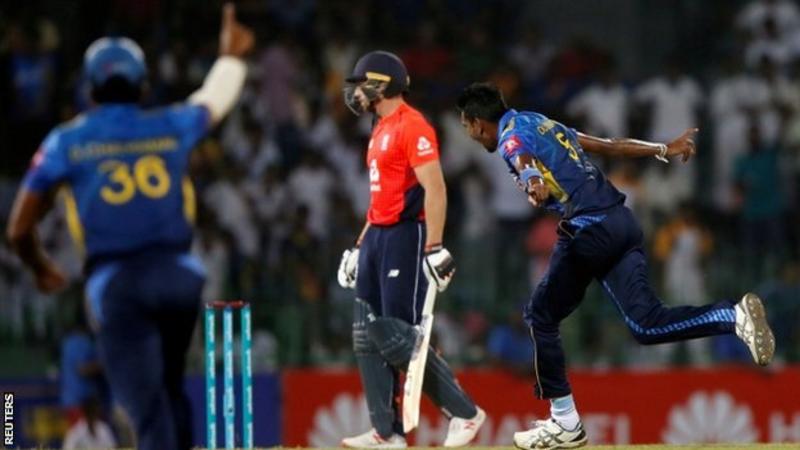 A dismal England fell to their heaviest defeat in one-day international cricket as Sri Lanka thrashed the tourists by 219 runs in the final ODI in Colombo.

With England having already won the five-match series, they made three changes, resting captain Eoin Morgan.

They bowled and fielded poorly, with Niroshan Dickwella scoring 95 as Sri Lanka posted 366-6 – the hosts’ highest score against England in ODI cricket.

England slumped to 4-3 in reply and were 132-9 when rain stopped play.

Umpire Aleem Dar ran from the pitch as a heavy storm broke while also signalling that Liam Plunkett’s dismissal for lbw had been confirmed on review.

That ninth wicket lifted the Duckworth-Lewis-Stern par score to 351 and, with no further play possible, the match was abandoned shortly after 16:35 BST, leaving England 219 runs behind.

England’s previous biggest margin of defeat in terms of runs was 165 runs, which has happened twice – against Pakistan at Karachi in 2005 and West Indies at Kingstown in 1994.

Having won the ODI series 3-1, England now face Sri Lanka in the sole Twenty20 on Saturday before the three-Test series starts on 6 November.

This was a strange and at times disconcerting display by England, at odds with the commanding manner in which they had won the three previous matches.

Fast bowler Mark Wood and left-arm swinger Sam Curran came in to open the bowling together but were targeted by Sri Lanka openers Dickwella and Sadeera Samarawickrama, who cruised 72-0 off the first 10 overs.

Moeen Ali offered some control before he too became expensive, while Adil Rashid was easily England’s best bowler in taking 1-52 off his 10 overs, but the tourists never dragged Sri Lanka back and became increasingly fractious.

Ben Stokes’ fury rose in line with his economy before he berated Wood and Moeen for misfields. Tom Curran later did the same to younger brother Sam – playing their first international together and the first brothers to do so for England since Adam and the late Ben Hollioake in 1999.

Those conflicts were a sign of the standards England hold themselves to and how far short of them they were falling in an unruly and disjointed performance, showing how much Morgan’s calm presence was missed. 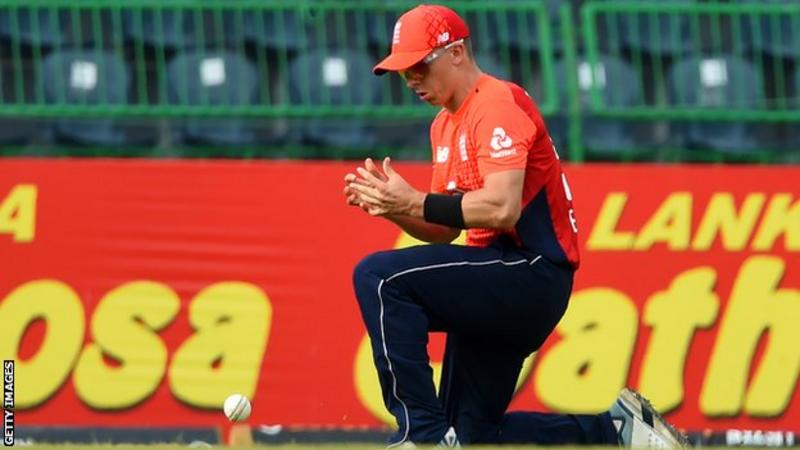 Tom Curran dropped a simple chance to remove Dinesh Chandimal for just six before the Sri Lanka captain went on to make 80, while Moeen spilled a similarly straightforward catch to dismiss Akila Dananjaya, who then launched the older Curran for a huge six to emphatically end Sri Lanka’s innings.

That sloppiness continued in England’s chase, with Jason Roy, Alex Hales and stand-in captain Jos Buttler showing poor technique against a swinging white ball as all three fell in the space of 10 balls.

Roy walked down the pitch to york himself and be bowled by Kasun Rajitha, Hales edged Dushmantha Chameera to a diving Kusal Mendis at first slip and Buttler advanced to the same bowler, only to nick off to wicketkeeper Dickwella.

Joe Root then chipped Chameera to point to leave England 28-4 before Moeen (37) and Stokes (67) combined for a stoic and fluent stand of 79, despite the latter barely being able to run singles and receiving frequent treatment, seemingly for cramp.

Once Akila (4-19) entered the attack to remove both all-rounders, England quickly collapsed, with only thunder, lightning and rain preventing Sri Lanka taking the final wicket.

Does the heavy defeat matter?

Any concern at England’s performance must be tempered by the context of this game – a dead rubber at the end of a series the tourists had already won and it was not their first-choice team, with Jonny Bairstow still out with the ankle injury he sustained playing football in training.

England’s aggressive batting also leaves them liable to losing wickets in clusters, but their performances since the last World Cup suggest this approach works much more often than not.

That said, the worry is that England will produce a performance like this in a World Cup knockout game, akin to their heavy defeat by Pakistan in the Champions Trophy semi-final last year.

“Sri Lanka took advantage of us having a very poor day,” Morgan told BBC Sport. “Right from the get-go they played quite an aggressive approach and I don’t think at many stages we reacted to that well.

“It is not setback at all – we have got to learn from every game between now and the World Cup.”

Sri Lanka have endured a tough run in one-day cricket, having lost six bilateral series in a row, but this was a hugely impressive victory against the world number one ODI side.

Dickwella and Sadeera set the tone, hitting boundaries all round the ground in an opening stand of 137, before the latter fell for 54 as a third umpire review confirmed he had been bowled by Moeen before the ball rebounded off Buttler’s gloves into the stumps.

Kusal Mendis, who came into the game in terrible form, smacked six sixes in a thrilling 56 off 33 balls as Sri Lanka reached 200 off exactly 30 overs, with 400 a realistic target.

That faded once Chandimal and Thisara Perera were dismissed in consecutive balls but lower order hitting from Akila and Dhananjaya de Silva carried Sri Lanka to their highest total of 2018.

They were backed up by their fielders – Kusal taking a superb catch in the slips while Sadeera and Chandimal also pulled off fine diving efforts on a memorable day for the hosts at the end of a frustrating series.

‘A poor way to end’ – reaction

England captain Eoin Morgan: “I have mixed emotions about the series. We have not played anywhere near our best. Until this game we have scrapped hard.

“It is great winning the series but today was a poor way to end it. It is extremely disappointing.”

Sri Lanka captain Dinesh Chandimal: “It has been hard work from everyone. Finally it has paid off.

“We need to put in consistent performances going forward. We are a young team, we keep improving. Consistency is the main thing and that is what we are looking at.”