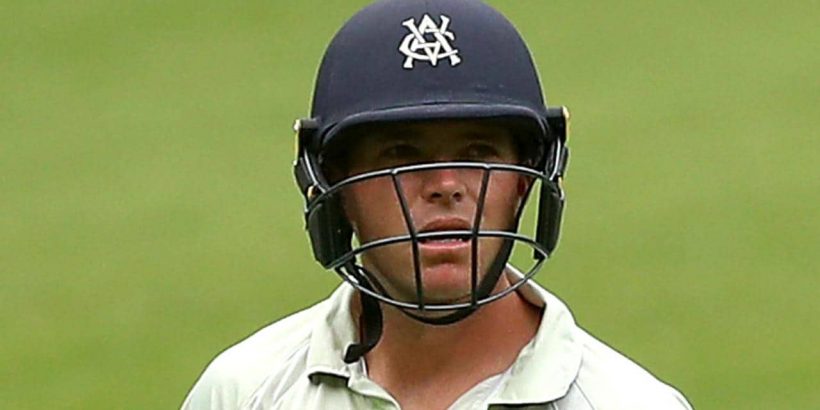 Australian Test batsman Marcus Harris has copped a one-match suspension for “abuse of equipment” during the rain-affected draw against Tasmania this week.

Harris was cited after he knocked over a chair when given out caught behind late on day one of the Sheffield Shield game.

Footage from the incident shows him indicating the ball had struck his elbow before heading towards the pavilion and slamming his bat on the turf.

Harris was found guilty of a level one offence, accepting a one suspension point and 50 per cent fine of his match fee.

The Victorian opener registered scores of 15 and 45 not out in the rain-affected draw at the MCG.

Because the offence was Harris’ second in an 18-month period, he was given a one-match suspension and will subsequently miss Victoria’s one-day clash against Tasmania on Wednesday.

In January, Harris partnered with David Warner during the fourth Test against India at the Gabba, scoring five and 38 in the historic defeat.

The 28-year-old was then named in Australia’s Test squad for the postponed tour to South Africa.

Harris is seemingly competing with Victorian teammate Will Pucovski for a spot in Australia’s Test side for the Ashes, but Queensland’s Usman Khawaja remains an outside contender.

The left-handed Harris has played 10 Test matches to date, scoring 428 runs at a batting average of 23.77.

Bowlers James Pattinson, Jon Holland and Will Sutherland have been left out of the squad after playing three consecutive Sheffield Shield matches.

Victoria has four one-day matches and three first-class games scheduled over the next 29 days.

“With such a busy schedule we’re taking the opportunity to rest some of the players who have carried a heavy load in our recent Shield games,” Victorian Chairman of Selectors Andrew Lynch said.

“This also provides an opportunity for some of the younger players within the squad, and we’re looking forward to seeing what they can produce on Wednesday.”