Ian Healy has endorsed Tim Paine to remain in the baggy green for another three years, which could see the man once labelled a "temporary captain" lead Australia on the 2023 Ashes tour and finish his career as one of the longest-serving Test skippers.

Paine's stocks are at an all-time high after leading his team to victory in the first Test, in the process becoming the first Australian gloveman to claim player of the match honours in 12 years. 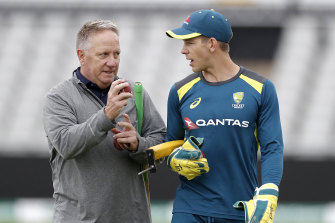 Of the 33 men to have kept wicket for Australia, only the peerless Adam Gilchrist boasts a higher average with the bat than Paine.

Few imagined such a scenario when Paine took over after the tumult of Cape Town in 2018. It also seemed hard to imagine during last year's Ashes when Paine was in a run of 17 innings without a half-century.

With Paine's form with the bat at a career-high, his work behind the stumps still at a high level and the team winning, Healy is not expecting Paine to hang up the gloves any time soon. 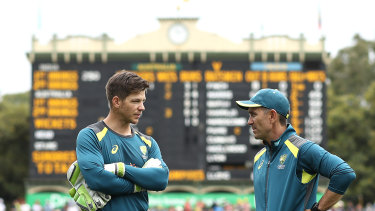 "I'm expecting him to play for quite long because he started so late – and it looks like he's in great shape physically and doing it well," Healy told the Herald and The Age.

"He's got a job to do so that will keep him interested, keep him motivated to get that Australian side on top again and in the hearts of Australians.

"He's led a massive cultural revolution, which has got to be draining, so I don't have a problem if he does surprise me and finish before I reckon he will because he's taken on so much, but I think he's about to reap the rewards and enjoy it a lot more. I've got no problems saying three more years."

Healy's projected timeframe would see Paine, with 20 Tests as captain, lead Australia into its next Ashes campaign on foreign soil, likely to be in 2023. It would also take him past Steve Smith's 34 Tests as leader and have him on the cusp of becoming just the fifth man to skipper Australia in 50 or more Tests.

Healy was a key figure in Paine's revival, taking him for an impromptu throwdown leading into the Old Trafford Test in which he urged the Tasmanian to bat more like a wicketkeeper rather than a frontline batsman.

Healy had sensed Paine, burdened by the "stresses" of leading the team, had lost the love of batting and was trying to play too correctly. In eight Tests since, Paine is averaging nearly 43 and played a key role with the bat in two victories. 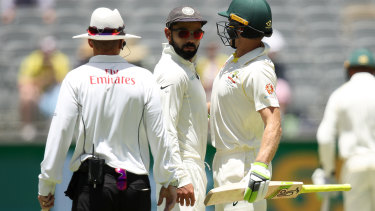 Virat Kohli and Tim Paine colliding during the 2018 Test series.Credit:Getty

"He tried to bat like Greg Chappell all the time," Healy said.

"The batting needs to be natural and free. Bad ball on the legs put it away, cut shot get it on. He was blocking bad balls last year and just surviving very much like a lot of the players did upfront in Adelaide.

"All I said to him was just put bad balls away, look for them and put them away. If it's a clip to leg, clip it hard. If it's a cut shot, go at it. Bat like a keeper and that's what he's done."

Smith, not only a champion batsman but a batting technician, sees no reason why the good times will not roll on for Paine. 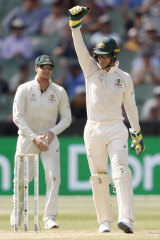 "If he can keep having those performances and change the momentum I think that's part of his job as the No.7 and wicketkeeper.

"The guys who do that the best around the world are willing to play the situation and take the game on. Whether it's pushing the total up or getting us out of trouble by playing aggressively and taking it on. I thought he did that really well the other day and hopefully he can keep doing that for us."