Australian star Georgia Wareham produced a fielding gem to help the Melbourne Renegades conjure an upset win over the Sydney Thunder in the Women's Big Bash League on Saturday.

In a contest at Hurstville Oval in Sydney which pitted the unbeaten Thunder against an opponent that was winless and at the foot of the table after five rounds, the Renegades shocked the competition with a two-run victory.

Chasing 111 to win, the Thunder struggled for early momentum, slipping to 2-12 and then 3-31 when Australian left-arm finger spinner Sophie Molineux (2-19 off four) bowled a threatening Phoebe Litchfield (18 off 26). But it was five deliveries later in the same over which proved to be the game-turning moment when star batter Rachael Haynes (3 off 5) fell. 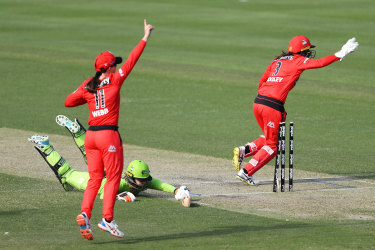 The Australian vice-captain had clipped Molineux to deep mid-wicket and sought a second run but found herself short despite a desperate dive after a brilliant flat throw by Wareham.

Haynes had been averaging 105 after four innings through this tournament, predominantly because of her unbeaten 61 off 51 balls against the Scorchers, at a slick strike rate of 119.31. She was the key wicket and Wareham in a moment of brilliance delivered, leaving the home side at 4-34 after nine overs.

This left England captain Heather Knight (19 off 27) as the Thunder's prime weapon and she and Rachel Trenaman (26 off 28) put on 32 in good time. Molineux, having earlier regained form with the bat (34 off 42) then returned to the attack, and delivered by inducing a return catch from Knight.

Wareham was also recalled, and had another joyous moment when she was awarded a controversial lbw against a sweeping Trenaman, with the delivery appearing to slide down leg slide.

The Thunder needed 19 off the final over delivered by New Zealand fast bowler Rosemary Mair (2-23 off four) and three boundaries in as many deliveries by Lauren Smith (18 not out) threatened to spoil Mair's 20th birthday. Mair, however, tightened her line and with a change of field was able to fight back. Smith needed four off the final delivery to tie but could only manage two runs, leaving the Thunder on 7-108 after 20 overs.

Earlier, the championship-winning pedigree of fast bowler Sammy-Jo Johnson (4-26 off four overs) was on display while spinners Sam Bates (2-16 off four) and Smith (2-15 off four) had another fruitful afternoon as the Thunder appeared to hold their opponents to a modest score.

Batting partnerships have been a significant issue for the Renegades all tournament but this time they at least had a platform to build on, for star South African batter Lizelle Lee (20 off 14), having underperformed to this point, contributed to an opening stand of 32, and they were 1-67 in the 12th over before skipper Amy Satterthwaite (19 off 23) fell. However, that promising start was wasted when they lost 8-43. 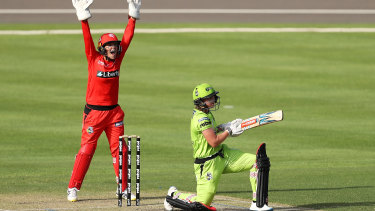 Johnson was an integral member of the Brisbane Heat's back-to-back premierships over the past two seasons with a combined 38 wickets. Her presence at the Thunder has been felt, for she now has eight wickets in four completed matches. The Thunder boast an attack the envy of most teams, for Bates, the left-arm finger spinner, has a tournament-high nine wickets.

Ryan upbeat but elbow an issue