Captain Joe Root holds the key… As the Ashes loom, coach Trevor Bayliss is still keen for reluctant Root to bat in England’s problem No3 spot

When England gather in Birmingham on Monday ahead of Thursday’s first Ashes Test, the message from coach Trevor Bayliss will be clear: step it up, or forget about wresting the urn from Australia.

The selectors have named a 14-man squad for Edgbaston, including World Cup hero Jofra Archer, struggling opener Rory Burns and a new vice-captain in Ben Stokes.

If that appointment is poor reward for Jos Buttler, who has been an impressive deputy for Joe Root over the past year, it says much for the manner in which Stokes has turned his life around 12 months on from his acquittal for affray. 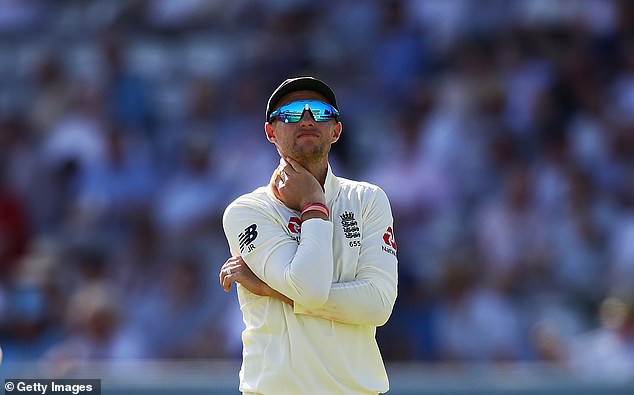 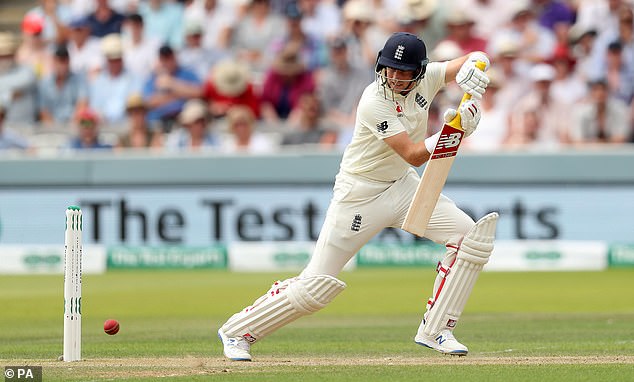 ‘Ben is highly respected within the team environment,’ said Ashley Giles, the managing director of England men’s cricket. ‘He is a natural leader and has a great understanding of the game. Over the past 18 months he has come a long way and has shown a great degree of maturity on and off the field.’ 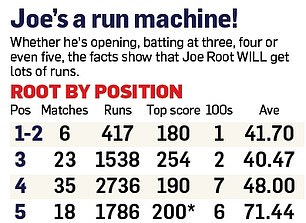 Stokes will also bring fresh energy to a team who looked off the pace during the Lord’s Test against Ireland, but who from August 1 must lift themselves for a possible 25 days’ Ashes cricket out of 47.

With that in mind, the selectors have named seven seamers for the first Test, which reflects the fitness concerns surrounding Archer, Jimmy Anderson, who both missed Lord’s, and Chris Woakes, who picked up six for 17 as Ireland were skittled for 38 on Friday.

Warwickshire seamer Olly Stone is retained, having worked up a head of steam during Ireland’s first innings.

But, not for the first time, it is England’s batting that faces most scrutiny: 85 all out on the first morning against the Irish, followed by a second-innings collapse of seven for 77.

Asked whether a lack of top-order runs was the biggest obstacle to England’s Ashes hopes, Bayliss shot back: ‘You don’t have to be Einstein to work that out.’ 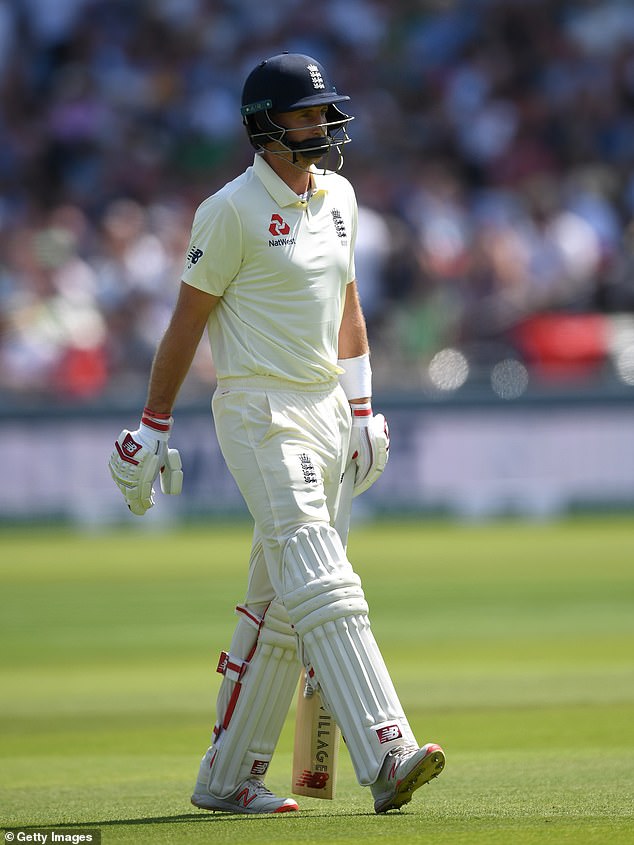 If Root bows to Bayliss’s logic, Jason Roy could then build on the recent 72 he made from No 3

This will be his final assignment after four years as England’s head coach. If he leaves behind an Ashes win and a functioning top order to go with the World Cup triumph, his friends may soon have to address him as ‘Sir’.

There is work to be done. As if facing Mitchell Starc, Pat Cummins and Josh Hazlewood with a large-seamed 2018-edition Dukes ball will not be hard enough, England remain unsure about the best configuration of a top order that has repeatedly failed to lay a platform for the strokemakers behind them.

It was a bizarre irony that one of their best starts to a Test innings for years — 171 for one on the second afternoon against Ireland — owed much to nightwatchman Jack Leach, who was selected for his left-arm spin, bowled three shaky overs for 26, and has been dropped. 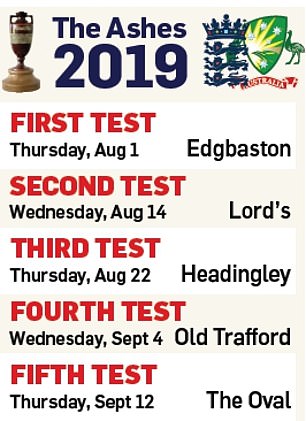 Instead, the pressure will be on Burns to get a score in the first two Tests against Australia, or go the way of so many England openers since the retirement of Andrew Strauss in 2012. Burns made a pair of sixes against Ireland, and now averages 22 from seven Tests — three fewer than the discarded Keaton Jennings.

But while Burns will definitely open at Edgbaston, other problems have less obvious solutions. Bayliss reiterated his long-held belief that Root should move up a place to No 3, with the likeliest reshuffle then casting Joe Denly as opener and Jason Roy as the No 4 — away from the new ball that many worry will be his undoing.

‘Look, Joe’s the captain,’ said Bayliss. ‘He’ll make the final decision, as he did when he went back to four. He knows how I feel. Whether he goes in at one for 20, or two for 20, he can still cop a good one.’

If Root bows to Bayliss’s logic, Roy could then build on the 72 he made from No 3 in the second innings against Ireland, having looked a fish out of water in his first-innings five as opener.

‘We want him to go out and play his natural game, but in red-ball cricket you have to be a little more selective,’ said Bayliss. ‘You have to make sure the ball is underneath your eyes, or it really is a true half-volley, especially on a wicket that’s doing a bit.

‘You’ve got to make a conscious effort to say to yourself, “Right, I’m not going to go for the big cover-drive on the up until I’m really settled, the wicket is flat or the ball’s not doing as much”. He probably looked a little scratchy, but he got 70-odd and helped us win the game.’ 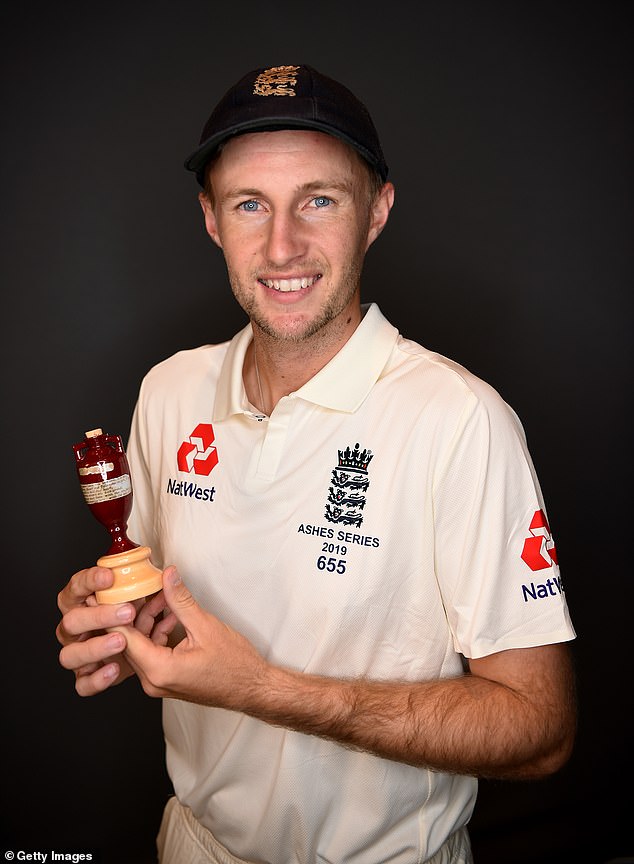 ‘We want him to go out and play his natural game,’ said Bayliss, as England chase the Ashes

An engine room of Stokes, Buttler and Jonny Bairstow — despite his tired-looking pair against Ireland — should take care of itself, which leaves England to work out how best to unsettle Australia’s batsmen. Archer, who has been recovering from a side strain, emerged unscathed from four overs in a Twenty20 game for Sussex on Friday evening, and could yet take the new ball with Anderson. But that will depend on the selectors’ conviction that his body is up to it; they may conclude that the second Test at Lord’s, starting on August 14, is more prudent.

‘It’s something we’ll have to discuss between now and the final selection, whether he’s bowled enough overs,’ said Bayliss. ‘We’ve got a duty of care to him, to not necessarily bowl him into the ground when he hasn’t played a red-ball game for 12 months.’

If Archer remains in cotton wool for one more Test, Woakes would then get the chance on his home ground to build on his Lord’s heroics, while Stuart Broad — who had match figures against Ireland of seven for 79 — would open with Anderson. The left-arm swing of Sam Curran is another option.

Now, England must hope that any remaining red-ball cobwebs have been blown away as they set about trying to secure a fifth successive home Ashes victory.

‘The type of match we had against Ireland, one we should win, we were forced into approaching it like one of the big teams, and we did the job,’ said Bayliss. ‘We certainly haven’t got any problems with intensity when we play India or Australia.’

England’s summer is about to hot up again.