Sydney Thunder young-gun Ollie Davies had a Big Bash debut to remember while Usman Khawaja survived an umpiring howler that will be impossible to forget.

Davies, just 20, whacked 36 runs from just 22 balls to help the Thunder overcome a shaky start and defeat the Perth Scorchers by seven wickets at a murky Manuka Oval. 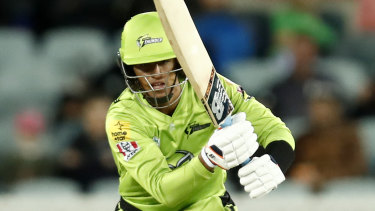 Oliver Davies had a Big Bash debut to remember.Credit:Getty Images

The Thunder have now won two of their opening three matches and will take plenty of confidence heading into Saturday's clash against the Melbourne Renegades.

Davies, a gifted batsman from the northern beaches, cleared the fence twice in one Jason Behrendorff over, then reverse swept former Thunder spinner Fawad Ahmed for as boundary.

While his knock ended earlier than most would have hoped, the fireworks left the Thunder needing just 44 runs from the final six overs to win.

More importantly, Davies' power hitting took the pressure off Ca]llum Ferguson at the other end as the skipper went on to crunch an unbeaten 61 from 53 balls. 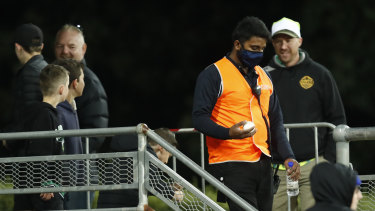 A security guard retrieves one of Ollie Davies’ sixes at Manuka OvalCredit:Getty Images

Davies broke his wrist in a pre-season trial game before the start of last summer's Big Bash, and his debut on Tuesday night would have been a morale boost for plenty of friends and family no doubt stuck in isolation back home on the northern beaches because of the latest COVID outbreak.

Davies arrived at the crease after Khawaja could not capitalise on being spared a life when caught behind off the bowling of Andrew Tye.

Tye started celebrating only for the umpire to refuse to raise his finger and Khawaja, then on 18, to stand his ground. 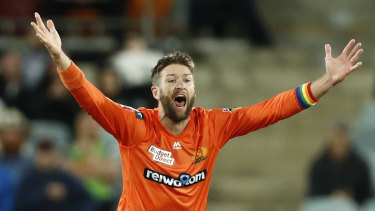 The umpire was overheard telling Tye "the bat hit the ground".

The TV commentators certainly thought Khawaja was out with Mark Waugh surprised Khawaja did not walk.

"It's a bit unusual because a big nick like that, natural instinct is to half start walking back to the change-room, but Khawaja stood there,'' Waugh said.

When Khawaja did depart the next over for just two more runs, Waugh noted the left-hander may have felt guilty about dodging the Tye bullet.

Fellow commentator Brad Haddin described the call as a "howler" while the argument about allowing teams one review for blatant dud calls in the BBL was discussed. 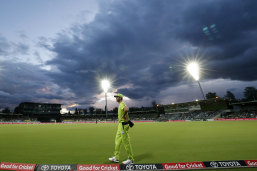 Tye lost his cool and bowled a couple of wides, had some words for Ferguson at the non-striker's end, and was later calmed down by officials.

Set 153 for victory by the Scorchers, and largely thanks to an unbeaten 61-run stand by Mitch Marsh ad Cameron Bancroft, the Thunder's run chase started dreadfully when Alex Hales was clean bowled for a second straight golden duck.

Perth powerhouse Marsh brought up his 50 with a hard and flat six over deep midwicket while Bancroft did well to keep the scoreboard ticking over to finish with the more-than-respectable 34 off 26.

Thunder's Kiwi recruit Adam Milne finished with the respectable 0-17 from his four overs, bowled with brilliant pace and gave up just two runs in the middle of the Perth innings after they looked set to build on their power surge.