Matthew Wade did not so much make a century against England as a century at England. It was a counter-offensive, with the emphasis on offensive. It went the distance, to 100 runs, to 15 rounds. At its heart was confrontation between Wade and his Hobart Hurricanes teammate Jofra Archer that was played out like a title fight.

Wade is combat cricketer, fitting uneasily into the new dispensation, but earning his place there by sheer weight of runs. He’s the sort of personality that needs to feel the grain and rub against it. It’s often a wicketkeeper’s thing. He’d been twice tried and twice let go as the Test keeper. Now he is back as a batsman, and you’d better believe it. 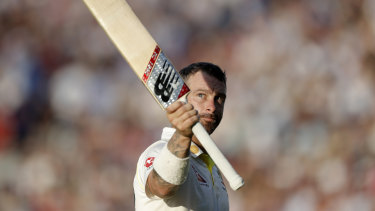 Matthew Wade raises his bat as he leaves the ground after being dismissed for 117 runs. Credit:Getty Images

Push came to shove, so England turned to Archer. One of the features of his introductory summer of Test cricket has been how he, already fast, in selected moments and without any apparent change of gear or action, rises higher still. The moments tend to select him. The Wade moment did.

A year ago, they were collaborators at the Hurricanes. Archer had not played a Test, and Wade appeared unlikely to play another. Now they were the Oval Test. Archer is nothing if not an image of a latent force, coiled up and ready for release. For eight overs, he went at Wade. For eight overs, Wade went at him. The ball flew like a pinball. Boundary fieldsmen braced themselves for the ball they might not see, let alone stop. Once, Stuart Broad and Ben Stokes managed between them to fumble one over rope at fine leg. Another time, the ball flashed almost through gully’s hands, more a danger than a chance. An England review became collateral damage.

Between deliveries, they exchanged glares and stares, but only a few words. Once, Archer gave Wade a sarcastic clap. Another time, Wade braced as he absorbed an Archer ball on his shoulder, then took two steps towards him. Even when digging out an Archer yorker, Wade somehow managed to project hostility. Again, though, the umpires saw no reason to act, though they did smile.

Archer did not slacken. Wade didn’t retreat. You could see the sparks fly, literally rather than metaphorically. The friction of bat on ball, ball on body, was greater than any persona animus. Underscoring it all, of course, was the way Archer with his dander up still channelled the menace, and the skill and bravery of Wade’s batting. You can’t make a Test hundred by belligerence alone. When Archer went wide, Wade pounced as only left-handers can. When he went short, he mostly ducked, but once hooked him for six. Altogether, he took from Archer seven fours and that six, for a total of 40. Other days, other batmen, there was not even a spare single for the taking.

At last Joe Root spelled him, honourably. Wade turned Broad to fine leg for the single that made 100, and let out a guttural roar as he sprinted down the pitch. On a day when even Smith had battled, he’d made an emphatic century. But the pitch was spinning and the batting was thinning and there was no point stopping now. As he hit out, Jonny Bairstow missed a chance to stump him and Stokes could not hold onto a sizzler at slip. Finally, Root fizzed an off-spinner past his outside edge and this time he was stumped. But he had and has the runs on the board. The philosophy of the Australian cricket team has changed, but the currency hasn’t.

Wade never stopped talking, and never will. But this day, his bat talked over him.