Australian coach Justin Langer regrets there were not more conversations among the squad about taking a knee in support of the Black Lives Matter movement before matches on the ongoing white-ball tour of England.

While players from the England and West Indies teams took the symbolic position on the field before the start of every match in their three-Test series in July, the same has not happened during Australia’s tour. 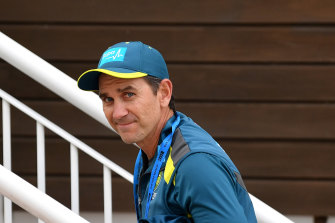 “There was so much going on leading up to us getting here, maybe we should have talked more about it.

“What we do talk about within the team, was that we want to have a response that is sustained and powerful, and that it can go not just in one action but a sustained period not just throughout this series and the summer but throughout time.”

Langer described Holding, who has been a vocal advocate of Black Lives Matter, as “one of the great people in world sport, and certainly our game.”

“I just hope,” Langer said, “if it looked like there was a lack of respect, it wasn’t the intention of our team.

"We were very aware of it. When Mikey says what he says, it’s certainly worth listening to.”

Australia play the final match of their tour from 10pm Wednesday with the one-day series tied at one apiece following the visitors' dramatic collapse in the second ODI at Old Trafford on Sunday.