Pat Cummins, Australia’s vice-captain, says the national team will perform a barefoot circle ceremony before each series this summer but individual players could also choose to recognise racial discrimination by taking a knee.

The Australian squad and coach Justin Langer have been weighing up how they can acknowledge their support for the Black Lives Matter movement during the home summer. 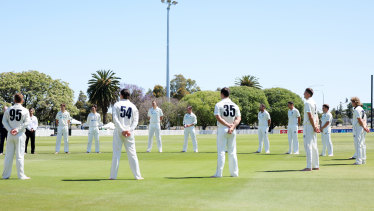 Players in the Sheffield Shield gather for a barefoot circle in Adelaide last week.Credit:Getty Images

They were criticised by West Indies fast bowling legend Michael Holding for not joining the fight against racial injustice during their limited-overs tour of England in August after the England and West Indies teams took a knee before each of their three Tests.

The Australians have now settled on a barefoot circle ceremony, as the Australian women’s team performed before their recent series against New Zealand in Brisbane.

“We’ve chatted quite a bit about it, especially over the last couple of months,” Cummins said. “We just think it’s really important to do our bit. We’ve decided to do the barefoot circle.

“I think we’re going to look at doing it at the start of each series. It’s a pretty easy decision for us. As soon as you try and learn a little bit about it, it just becomes a really easy decision. 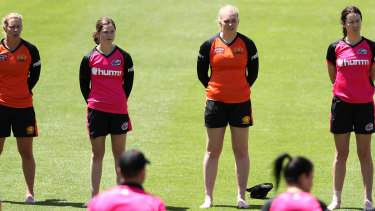 The Sixers and Scorchers teams form a barefoot circle in the WBBL.Credit:Getty Images

“Not only as a sport but we as people are absolutely against racism. I think we could probably put our hands up and say we haven’t done enough in the past and we want to get better.

“This is one small thing we’re going to introduce this summer. In addition we’re going to try and do a lot of work on our education where we’re trying to learn as much about our history here in Australia in particular.”

The Australian team will also be wearing playing shirts with an Indigenous design on it for the upcoming Twenty20 series against India.

Sheffield Shield teams last week gathered in a barefoot circle before their matches to mark the start of NAIDOC week.

In the Women's Big Bash League players have taken a knee, with the Sydney Thunder, Adelaide Strikers and Hobart Hurricanes doing so throughout the tournament while others have formed a barefoot circle.

In an interview with The Sydney Morning Herald and The Age last month, Holding urged the Australian men’s side to take a knee when they next assembled for an international match.

Cummins said the Australian men's side had decided on the barefoot circle to represent discrimination against Indigenous Australians but players could still take a knee if they wanted to.

“We think the most marginalised group [in Australia] is the First Nations people … the Indigenous people. We think the barefoot circle is a great way to celebrate them," he said.

Australia will open their summer against India in a one-dayer at the SCG on Friday week.