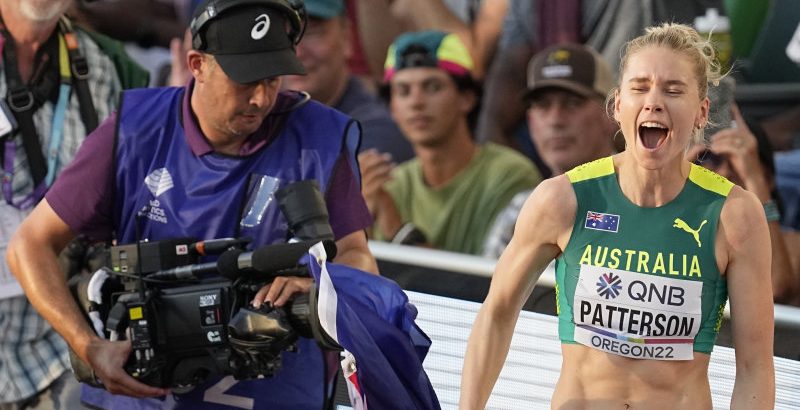 Birmingham: Eleanor Patterson worked in a bakery part-time and was still at school when she won Commonwealth Games gold in Glasgow eight years ago as a crushingly shy teenage girl from a small country town in south-eastern Victoria.

She fidgeted when she spoke, glanced past you apologetically, and smiled reluctantly in case it encouraged further conversation. She was, by her own admission, expecting to be a wallflower in Glasgow, there to observe everyone else, when suddenly she became the observed. She was deeply uncomfortable.

Four years ago, Patterson had quietly given the sport away. She got to a point where she stopped loving high jump and drifted into retirement without ever making a conscious decision to do so. She was deeply unhappy, and she hated where she was and what she was doing. 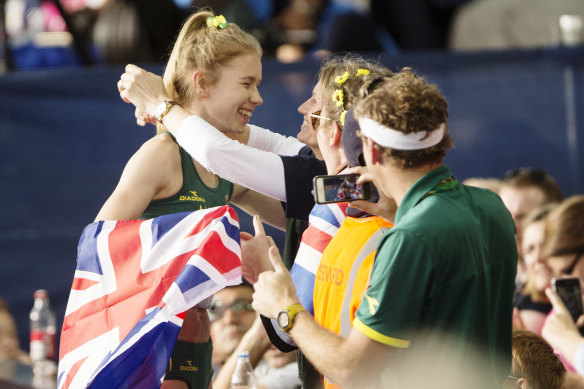 Eleanor Patterson after her triumph at Glasgow in 2014.Credit:James Brickwood

Patterson is now a world champion. She won that gold last month in Eugene, in Oregon in the US. Eight years on from Glasgow, she returns to another Commonwealth Games in the UK, this time in Birmingham, and her sporting life has come full circle, though her personal life has not.

Everyone changes from teenage years to their twenties, but the change in Patterson is so stark and so warm. She is the girl who endured a bleak period of miserable uncertainty but hit a crossroads and chose the right path, and has emerged as a confident, self-assured woman.

In the scheme of things it seems ridiculous. I started from scratch less than four years ago, and I am world champion. It’s good to have a reminder because it still does feel like a dream come true,

It’s like she stepped off halfway through a ride and is now a completely different person to the one who won gold in Glasgow.

“This is a year of full circle. My first international competition was Glasgow 2014. I was 18 and so young and naive. The last three or four years has been the biggest amount of growth for myself,” she said after arriving in Tonbridge, England, as the new world champion. 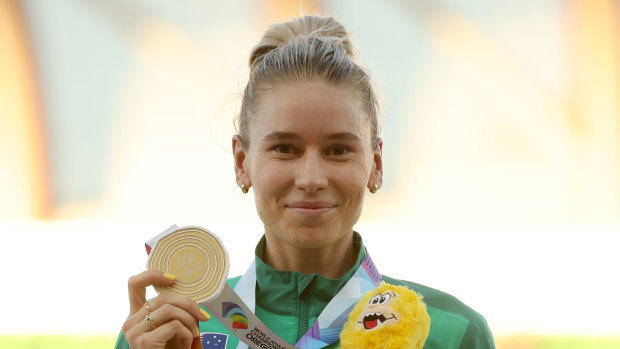 In 2016 at the Rio Olympics, Patterson could not clear a training height and sobbed inconsolably in the mixed zone afterwards. In 2018, she did not make the Australian team for the Gold Coast Commonwealth Games and just stopped training and engaging with anyone much in the sport.

“Obviously I stepped away from the sport [in 2018]. I wasn’t happy in any way, I wasn’t enjoying the sport, I wasn’t happy within myself, I wasn’t confident, I was not happy in the environment I was in and that was showing out on the field and athletics is such an area where it highlights a lot of things going on in life. And anyone in life can only hold on for so long, but it got to a point where I couldn’t hold on any longer, and I was not happy in any shape or form,” she said.

“There were a number of reasons why I stepped away, it wasn’t necessarily a moment, it took me a long while to wrap my head around it in all honesty. I still held on to such a strong belief in this dream but everything else that life was throwing at me, I couldn’t hang on to any longer, so it was a gradual understanding of ‘I am done’.

“I hadn’t been training for a number of months, but I was hoping to return, and then it got to a point where I was like ‘I don’t think I want to’. It was a slow progression and that was the same for returning. It took me over a year to wrap my head around stepping away and not entering into a gym, not stepping foot on a track. So it took me over a year to feel at peace with myself and realise ‘I am not finished here’. I knew I needed to change my environment and so I had always had in the back of my head if I ever decided to change the environment that Alex Stewart was the one that I would go to.” 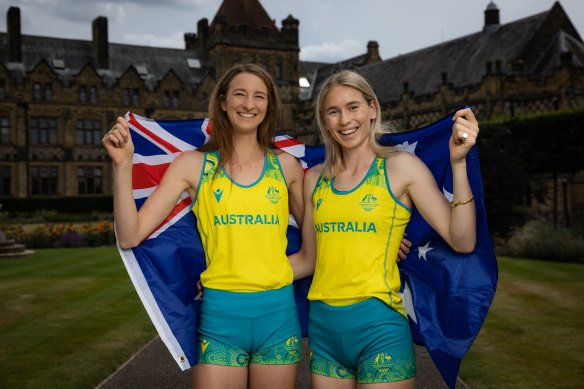 Stewart is a high jump coach in Sydney. He coaches Brandon Starc.

When Patterson broke through in Glasgow, there were offers from Athletics Australia for her to take funding and help with coaching but Patterson for myriad reasons resisted, wanting to stay at home in Leongatha. By late 2019 she realised she needed to change something. She knew she fundamentally still loved jumping and wanted to get back to enjoying doing it. She got in touch with Stewart, who had occasionally reached out with kind, unsolicited messages after she had missed the Australian team.

“It wasn’t until really 2019 … that I admitted to him – and he was probably the first person I admitted it to in the athletics world – ‘hey, I am not training, I haven’t been training for this long’. I kind of just disappeared and ghosted the sport.

“I kept under the radar and I kept it that way. Then I spoke to him and he was like ‘come and join us in training’.”

She took some time to pluck up the courage. She was unfit and wanted to hit a gym before rolling up to a training session and embarrassing herself.

She eventually moved to Sydney and the physical shift was as important in opening up her world as Stewart’s advice was about the fact being a world-class high jumper is not just about understanding how to jump high.

“Alex was always telling me simple things like ‘walk like you are an Olympic champion, walk like you’re a world champion’ and about the way you go about life,” she said.

“The training environment with other athletes, Brandon Starc, he is such a professional athlete, and others there that are world-class, and obviously they are men and they are able to jump higher than me, but I am such a stubborn person I was like ‘if they can do that, I can have a crack and do it’.

“Everything was so new and different. It really changed me physically and mentally and I really felt like I was fresh in the sport. I had this rejuvenated love of the sport and enjoyment in so many facets.”

She came from basically scratch for fitness but has quickly rebuilt her career and life. She moved to Sydney, travelled to Europe and began competing on the Diamond League circuit. She has a boyfriend, Marco, who is a European athlete. She is happy.

In the final in Eugene, she was jumping with fellow Australian Nicola Olyslagers ,who won silver at the Olympics last year (she was Nicola McDermott then).

Patterson was nearly being eliminated when she cleared 198 centimetres with her third and last jump to stay in the competition. She then cleared two metres for the first time ever and moved from fourth to first place. Then she jumped another personal best, and a national record, when she cleared 2.02m and won gold.

“In the scheme of things it seems ridiculous. I started from scratch less than four years ago, and I am world champion. It’s good to have a reminder because it still does feel like a dream come true,” Patterson said.

“I knew for a long time I could bring that type of jump to fruition, that type of performance, but now the rest of the world knows.”