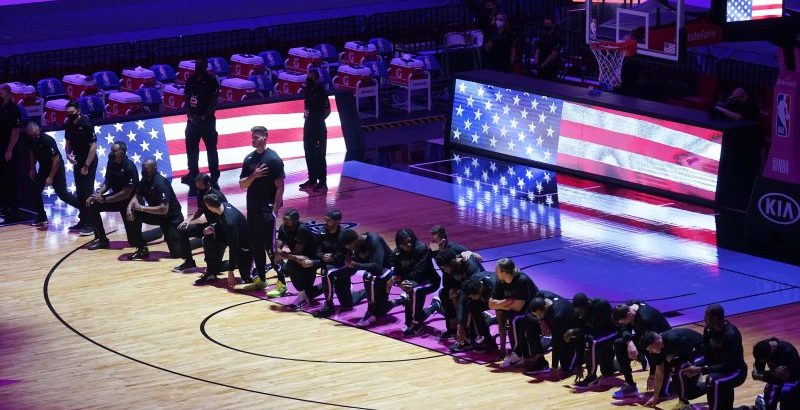 Miami: The Boston Celtics and Miami Heat knelt for the national anthem on Thursday (AEDT), saying they were playing “with a heavy heart” after a violent mob loyal to President Donald Trump was able to storm the US Capitol and the decision earlier in the week by a Wisconsin prosecutor not to charge a police officer who shot a black man last year.

The scene from the Capitol, where a mob delayed Congress from certifying the results of November’s election and paving the way for President-elect Joe Biden to be sworn in later this month, was widely discussed around the NBA before games occurred that night. 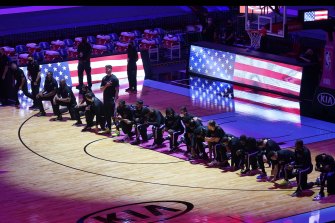 Boston players kneel in protest before their NBA match against Miami.Credit:AP

Biden will be inaugurated on January 20.

It was not known if the Heat and Celtics would face penalties for kneeling from the NBA, which has had a rule for decades that players and coaches must stand for the national anthem. That rule was relaxed last year when the season resumed at the bubble inside Walt Disney World in Central Florida, as part of the statements demanding societal change that the league made and encouraged from teams and players.

“I’m 59 and I’ve never seen anything like this,” Orlando coach Steve Clifford said, when asked for his reaction to the events in Washington. “Our country, we’re being laughed at all over the world. From the way that we’ve handled the pandemic to this … it’s a sad day for everybody.”

Meanwhile, a men’s college basketball game scheduled to be played in Washington was postponed after a city curfew was imposed in response to the mob's actions at the Capitol.