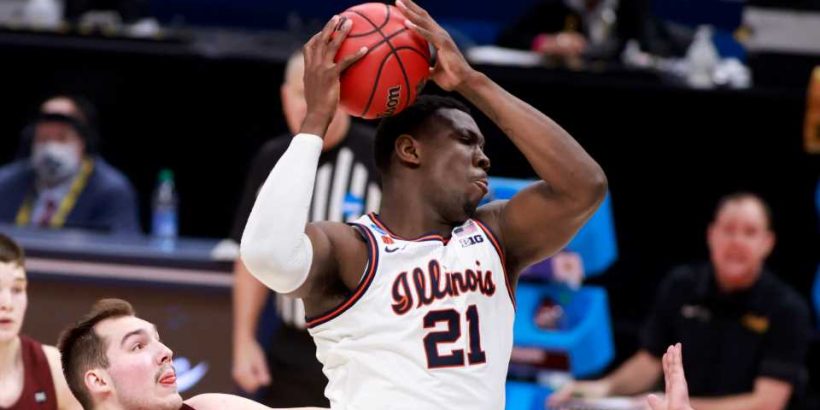 INDIANAPOLIS – It was almost as great a challenge to hear Kofi Cockburn speak from behind the small podium at Big Ten media day as it is to stop him from dunking the basketball. He was here Thursday afternoon, dressed far more stylishly than when we usually see him but still as big as ever, talking softly but proudly about trying to establish himself as the best player in college basketball and to achieve as much success as possible with the Illinois Fighting Illini.

Not long after he spoke, Michigan’s Hunter Dickinson took a seat and spoke about his ambitions and his team’s and about the work he has done during the offseason to help make the Wolverines even better than a year ago.

This was very much a 2021 occasion, and not just because the Big Ten chose to place this event at Gainbridge Field House rather than a hotel ballroom near O’Hare Airport. Prior to the Steph Curry Revolution, big men as talented and accomplished as Dickinson and Cockburn did not merely “test the waters” and return to give college hoops another shot. They went eagerly into the NBA Draft. They became prominent draft picks. Their teams endeavored to move on without them.

It’s that simple: In another era, before the 3-point shot became the most important offensive weapon in the game, Cockburn and Dickinson would not be playing in the Big Ten this season.

“I think it’s sad,” Illinois coach Brad Underwood said, even though the changes in the NBA have gifted him with another season of Cockburn. “I guess maybe I’m the old-school guy here a little bit. Growing up and watching Jabbar and Wilt, and then it changes to Shaq — the closer you get to the basket, the better chance you have to score. Patrick Ewing, all those guys.

“You look at this league, the quality of the big men in this league is unparalled. It’s not even close nationally. I don’t know what that means for them down the road; we’ll see. It’s changed, and yet they’re still such dominant college players. I’m excited about that. I know we’re fortunate to be able to coach him. And I hope that there’s a place for all of them.”

DECOURCY: College sports are transforming, but March Madness will survive

In 2001, four of the top 10 picks in the NBA Draft were U.S.-trained big men, and there were eight such players chosen in the first round. By 2021, there were only three American “centers” chosen, and none fit the low-post prototype of the Chamberlain/Jabbar/O’Neal days. Former USC Trojan Evan Mobley is a dynamic 7-footer known for his mobility around the lane. Kai Jones of Texas is an even more electric player who carries only 220 pounds on his 6-11 frame. The NBA once worried about such players getting bullied in the lane, but now shooters such as Curry have stretched defenses so far there isn’t as much traffic inside.

What separates Cockburn and Dickinson from the other big men in the Big Ten is each was a Sporting News second-team All-American in the 2020-21 season. But there are several other talented centers in the league: Maryland’s Qudus Wahab, a transfer from Georgetown; Cliff Omoruyi of Rutgers and the slightly smaller but no less capable E.J. Liddell of Ohio State and Trayce Jackson-Davis of Indiana. Purdue has two exceptional bigs, Trevion Williams and 7-4 Zach Edey.

Dickinson is a 7-1, 255-pound sophomore. He is a true center who scored the vast majority of his points last season very near the goal, more effective than most at simply powering through defenders who challenged him at the rim. He entered the NBA Draft but announced in early July he would withdraw and return to the Wolverines. As a result, in a poll conducted by The Athletic and Columbus Dispatch, UM was favored by a panel of journalists who cover the league to win the 2021-22 Big Ten championship.

“They just told me to keep expanding my game. That’s where the NBA is right now,” Dickinson told SN. “Just show that you can guard pick-and-roll, switches, and then finishing over my right hand, being able to do more counter moves. If I’m able to apply that to this year’s team – I’m not going to force it. We’re still trying to win a national championship, and whatever that takes from me is what I’m going to do.”

There still is a place for a mountainous man such as Cockburn — 7-0, 285 pounds — on an NBA roster, in an NBA lineup. But is there room for Cockburn, in particular? The pro teams he spoke with while navigating the early entry process told him it would be helpful for him to gain some proficiency as a passer out of the post (he had only five assists in 31 games last season) and to make mid-range jumpshots, as well as to defend comfortably when switching a pick-and-roll becomes necessary.

Mastering these skills would make Cockburn a better basketball player, but there is the question of whether incorporating them into the Illini’s approach would make them a better team.

“I think that Kofi’s got an unlimited pool of talent,” Underwood told SN. “Are we going to set him out there and let him shoot 15 threes a night? No. We’re not. Let’s not forget that he had 79 dunks, led the country in that area, was the No. 1 guy in the country in ball-screen rolls. He’s efficient there. And yet, can he go and handle the basketball? Yes. Can he play in dribble handoffs and short rolls and make passes? Yes.

“We didn’t do that last year simply for the fact we didn’t get the chance to work on it in the offseason. He’s capable of those things. And that will help us. He expands his bag, so to speak, and it helps us expand our bag.”

Dickinson was a revelation as a Michigan freshman. He was not even ranked among the top 40 prospects in the 2020 recruiting class but scored in double figures in his first 11 college games, including 26 when he made a homecoming to Maryland, where he’d played in high school for DeMatha Catholic.

He finished his season with averages of 14.1 points and 7.4 rebounds and finished just shy of a .600 field goal percentage. He tried only four 3-pointers, missing them all.

“I wasn’t surprised he had early success as a freshmen. I watched him in high school and how he was able to make plays out of being doubled in the post and make the right pass on time, on target, seeing the open man and not trying to do more but just wanting to make a winning play,” Michigan coach Juwan Howard told SN.

“How that’s going to translate and transition into the NBA? I’m not here to talk about the NBA right now because he hasn’t gotten that far. He has a sophomore year he’s looking forward to.

“He’s a joy to coach. And I enjoy having him in my corner.”