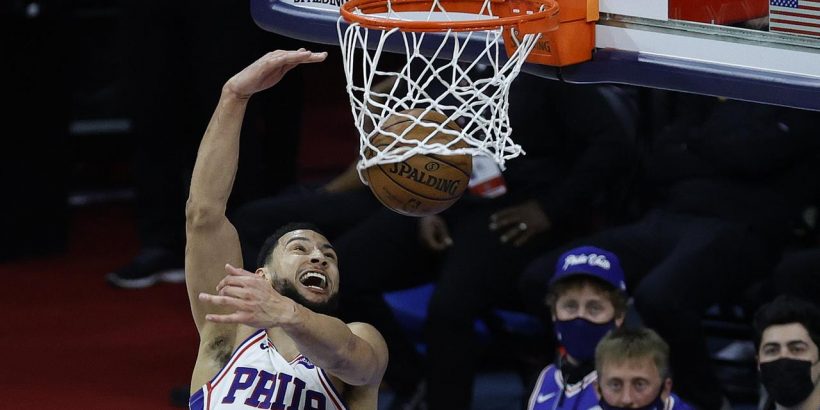 Australian fans and legends alike have expressed frustration following reports Simmons is unlikely to play at Tokyo to focus on skill development after a disappointing NBA playoffs campaign with Philadelphia.

Anstey believes the Melbourne-born guard would benefit from a stint in the Boomers’ team-first system alongside the likes of Joe Ingles, Patty Mills and Aron Baynes.

“It would be incredibly disappointing, especially given he is healthy, for Ben to not be available,” said Anstey, who represented the Boomers at the 2000 and 2008 Olympics.

“And to the extent that if he doesn’t play this one, I just think he might as well not play again because the culture is too important.

“For me, it is not so much the skill development, it is about finding enjoyment in the game and representing yourself and your country.

“This is a wonderful opportunity for him to show what Australian basketball means to him, to remind people of where he came from and to give our country the best possible chance of winning a medal.

“Ben hasn’t played in a major tournament yet, and I hope he doesn’t get to the end of his career and have this really deep regret that he has been painted with a brush of never finding the time or energy to represent his country when others in the same situation did.

“And this year is the one that we really need him.”

“I think Ben will be traded and we’re hearing Portland to play alongside Lillard, which would be really interesting,” he said.

“It is almost like Warriors forward Draymond Green in that Ben is a ball-handling, distributing and passing big who facilitates high level scorers like Lillard or Steph Curry.

“But I think a really good circuit breaker and one that would appease the Australian basketball public is to play for the Boomers at an Olympic Games.”

Throw in Simmons’ shooting struggles, especially from the free-throw line, and parting ways makes sense for both players.

“Both those guys need a genuine perimeter threat around them,” he said.

“On top of that, it has been well documented that they don’t get along fantastically well, so there has always been that.

“But it has reached breaking point now, and clearly Philly’s choice is to go with Embiid.

“I think once we all take a breath, and Ben finds a situation in the NBA that suits him, we will be reminded of what an exceptionally talented player he is.”