Canberra Capitals are not the same team that won last season's WNBL title, but showed they are every bit as dangerous in a win over Southside Flyers on Thursday night.

The Capitals scored a 91-72 victory to stop the Flyers winning streak at six games and move themselves up to a 4-2 record with a clash against Melbourne Boomers at the State Basketball Centre on Saturday night. 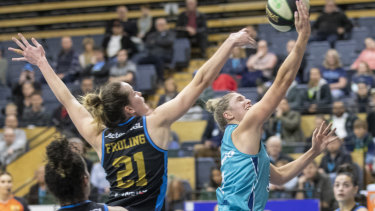 Most impressive was the rebounding and turnover counts which saw the Capitals win the boards 48-31 and force the Flyers into 20 turnovers.

Flyers point guard Leilani Mitchell led her side with 23 points while centre Mercedes Russell (15 points) and guard Bec Cole (12 points) offered support for a team which looked a little tired after their 6-0 start to this season.

Griffin saw the win as a turning point for her side who have had to replace point guards Leilani Mitchell and Kelly Wilson while bringing herself and Tolo back to full health after injuries. 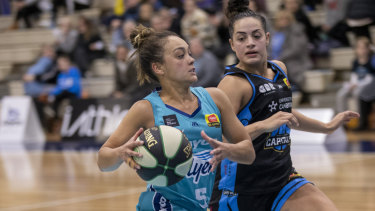 Fast and furious: Southside’s Leilani Mitchell strides to the hoop against Canberra on Thursday night.Credit:Mick Connolly

"It's interesting that we are really physical with each other at practice but it hasn't carried over into games," Griffin said.

"Tonight was the first game where we have come up and played like we do in practice, so that was really big for me because I feel like we have been doing the hard work but it hasn't been transferring into results."

Cole said the Flyers were disappointed to not be able to match the physicality and effort of the Capitals, but they would be well-served by the two-week break in WNBL action as the league pauses for pre-Olympic qualifiers.

"It's pretty disappointing but we still need to be happy with the start to our season," Cole said.

"We probably looked a bit tired there tonight. One of our main points was to match their intensity, physicality and hustle and I think we didn't get that done and it showed on the scoreboard.

"At least we have a break now and see where we can improve our game, especially defensively."

Cole added her side would improve their offence too after the Capitals took away some of their most frequent scoring avenues.

"They knew our weak side lob was coming and so they were getting some intercepts so that's where we need to use our pass fakes and look at the skip pass," Cole said.

"I think everything was a result of tired decisions but they are a good team, the champions of last season and tonight they were just a lot better than us."

The Flyers don't play until after the international bye while the Capitals play Melbourne Boomers at the State Basketball Centre on Saturday at 7.30pm.