The Canberra Capitals have called on Basketball Australia to drive the WNBL forward as an increased player pay deal sparks concerns about the viability of some clubs.

The WNBL’s minimum player wage has risen to $13,000 following a move driven by the players association but questions have been raised about the ability of eight clubs to support the 75 per cent increase. 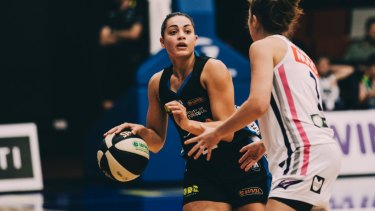 The Capitals hope a better pay deal will keep players in the game for longer and inspire the next generation.Credit:Jamila Toderas

Capitals general manager Lucille Bailie lauded the move but concedes it is "barely part-time, they could go and pull coffees at McDonalds or a cafe and probably gross that much… we've still got a long way to go".

The WNBL has no salary cap in place which inevitably leads to concern about smaller clubs struggling to keep up with their wealthier counterparts.

The Adelaide Lightning were in danger of going under with the club's crowd numbers and finances in dire straits until they were rescued by a private consortium earlier this month.

"There has been a lack of consistency over time. Right now Canberra is doing a great job of attracting crowds and putting out a quality product, but we’ve got to consolidate what we’re doing," Bailie said.

"The Melbourne Boomers and Townsville are doing great, but Adelaide aren’t doing so well so we need them to spike. We need eight clubs consistently delivering quality experiences and growing revenue.

"It’s not rocket science, but we also need significant support from Basketball Australia, who own and operate the WNBL.

"We need eight fully functioning, viable clubs, but we need strong leadership, funding and support from Basketball Australia to help drive and lead the league and individual clubs. 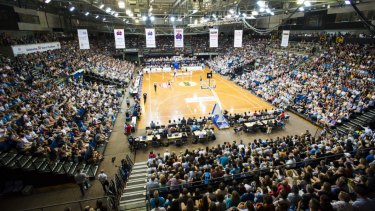 Huge community support is something the Capitals hope every club can repeat.Credit:Dion Georgopoulos

"We know it’s a tough game for the eight clubs to be viable as individual business entities. Accordingly, it’s a sensible approach to increasing the minimum wage and it needs to evolve.

"It’s also a good reminder that if clubs are competing in the league, we need clubs to be viable businesses that compensate their employees, the players, appropriately."

Former Melbourne Boomers general manager Justin Nelson took to social media to remind everyone to put the eight clubs at the top of the thank you list, tweeting "after all, it's the clubs that pay all player wages in the league".

The WNBL's presence on both pay TV and free-to-air TV is a major factor in the league's ability to boost eyeballs which Bailie hopes will ideally turn into sponsorship dollars to ensure the sustainability of clubs.

That in turn will allow clubs to pay players more,  "and the cycle repeats".

"If we’re seeking to call ourselves a professional competition, professionals are paid and compensated appropriately. It’s a great step, I believe there is a long way to go," Bailie said.

"If you work on the number of hours players have to commit to be successful sportspeople, it’s easily a part-time job, and for many we seek to make it full-time. The demands on players are at minimum like a part-time job.

"It’s good for today’s players, but what we also want to demonstrate to the WNBL players of the future, is that there is a suitable and appropriate professional opportunity for them to play basketball.

"It’s an exciting time, there is a real momentum in a lot of sports in their women’s products at the moment. We know the WNBL has been around a long time but we need to capitalise on the momentum across women’s sports at the moment."