Boston Celtics' Jayson Tatum scored a career-high 41 points and put his name up with a legendary Celtics star in the process.

Tatum scored 41 points in just 30 minutes becoming the first Celtic to do that since Larry Bird scored 43 points in 29 minutes in 1986.

The 21-year-old's big night pushed the Celtics to a 140-105 win over the New Orleans Pelicans on Sunday AEDT, and Tatum was among the key Celtics who sat out the last term due to the size of their lead. 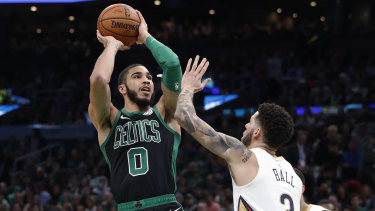 Last week Tatum was praised for a big improvement in his defensive game by Team USA coach Gregg Popovich, who coached him at last year's FIBA World Cup. Popovich believes Tatum has the opportunity to become one of the true "two-way" players in the NBA if he continues to develop at both ends.

But his offensive display on Sunday showed his attacking skills are already among the best in the NBA as he shot 16 of 22 from the field and six of nine from the three-point line. The Celtics ended a three-game losing streak and improved to 26-11 on the season.

Celtics coach Brad Stevens said Tatum was building a strong season and had much improvement to come. 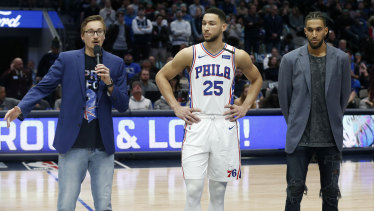 "He had a couple of really great finishes with both hands early in the game, he had the right mindset – attack," Stevens said.

"It helps when you start off these 40-point games with a couple of lay-ups and a couple more off bigs sealing for him.

"He proceeded to pull off a couple of steals, and with that the basket starts feeling a bit bigger and helps a couple of threes go down.

"The finishing will be important for us. We've talked about that a lot, about how best to do that.

"Jayson has had a great year but I think he can get better."

Australian shooter Ryan Broekhoff is out injured but he stood up for his country before his Dallas Mavericks scored a win over Ben Simmons and the Philadelphia 76ers in Dallas on Sunday.

Broekhoff, with Simmons and fellow Australian Jonah Bolden standing alongside him, gave the crowd an heart-felt address pre-game about the ongoing bush fires in this country.

Simmons had a solid night on court with 11 points, 11 assists and four steals but his side had no answer for the Mavericks array of offensive threats as Luka Doncic (19 points, 12 assists) led his side to a 109-91 win. 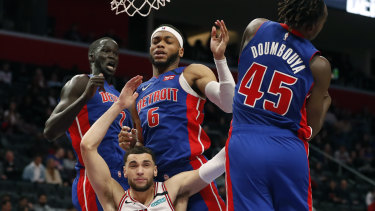 Australian big man Thon Maker made the most of some extra minutes to score 10 points in 10 minutes as his Detroit Pistons lost 108-99 against the Chicago Bulls.

Drummond's early departure freed up some extra time for Maker and he did his best to show what he can do.

Dante Exum was again sidelined by illness as the Cavaliers upset the Denver Nuggets 111-103 in Denver.