The Sydney Kings have left no doubt they are the NBL title favourites after a resounding win over Melbourne United in Sydney on Sunday.

While Melbourne were noticeably missing the defensive poise of injured duo Shea Ili and Alex Pledger, what can't be ignored is that the Kings took the contest to United from the outset, forcing them into foul trouble and then submission en route to a 111-101 win. 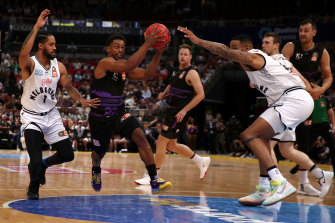 Casper Ware was on song against his former team as the Kings eased past United.Credit:Getty Images

Melbourne believes their defence can be the best in the NBL, but on Sunday the Kings took what they wanted. If not for Kings coach Will Weaver sitting his stars in the final term the margin, which peaked at 24, could have been far bigger.

NBL commentator and former Kings coach Andrew Gaze described his former side as looking "nearly unbeatable" at present, but it must be noted the Kings face the toughest test in the league against the Perth Wildcats in Perth next Friday night.

Kings star Casper Ware again starred against his former club, knocking down 27 points in just 25 minutes. He stared down the Melbourne bench after a three-pointer late in the third term which capped a quarter in which the Kings posted the highest three quarter-time tally (96 points) this season.

"It was a fun game, everybody did their part and we made it easy on ourselves," Ware said post game.

Kings import Jae’Sean Tate (25 points, six rebounds) was outstanding for the second week in a row after a match-winning display against South East Melbourne Phoenix last round.

Melbourne import Melo Trimble knocked down 32 points, but had little help as Chris Goulding was slowed in the second half after scoring 15 of his 18 points in the first 20 minutes.

Foul trouble hit both clubs as the referees showed little restraint on the whistle, with the foul count 28-22 against Melbourne.

While both sides will likely complain, the Kings adjusted best, driving hard at Melbourne's players and forcing starting big men David Barlow and Shawn Long to foul out by the final term, Barlow's five fouls coming in just eight minutes.

Andrew Bogut's numbers weren't big with nine points and eight rebounds but he drew five fouls, several of them against Long, who he clearly focused on subduing.

The Kings (11-1) remain on top of the NBL and claimed only their second win from their past 12 games with Melbourne United (7-6), who fall back into the pack with sides on the edge of the top four.

If there was one bright spot for Melbourne it was development player Jack Purchase, who made his NBL debut when introduced with four minutes to play. Purchase is the son of 250-game Melbourne Tigers player Nigel Purchase.

*South East Melbourne Phoenix coach Simon Mitchell says his side must fix their slow starts if they want to compete for a finals place.

The Phoenix recovered from a 16-point deficit to beat Brisbane Bullets 110-95 in Brisbane on Saturday to claim their first regular-season win outside Victoria.

But Mitchell said his side couldn't continue to rely on big comebacks, especially after conceding 61 points in the first half.

The Phoenix (6-5) face reigning champions Perth Wildcats at Melbourne Arena next Sunday, and Mitchell said his side would talk further about their first quarters.

Stars John Roberson and Mitch Creek have both ranked among the NBL leaders for second-half scoring, and both struggled in the first half against Brisbane before firing up.

"We have mulled over some ideas, switched up some things and changed our starting line-ups but we continue to have this issue," Mitchell said.

"If we don't resolve it, then we are not going to be in amongst the teams competing for top-four positions."