Kyle Adnam never had much size, but he always had big dreams. 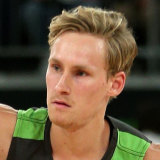 As a kid coming up with Kilsyth Cobras, he dreamed of playing professional basketball despite always being among the slightest players on court.

When the South East Melbourne Phoenix run out against New Zealand Breakers at Melbourne Arena on Saturday night, Adnam will play his 100th NBL game.

Some statistics list him as playing closer to 111 games, but checks with the league this week confirmed this will be officially his 100th game.

"I always had a goal and dream to be a long term NBL player and more than that when I was a kid," Adnam said.

"I've always had to be a big dreamer. I had to be to get where I am today.

"It's a nice little moment but I'm hoping to play a lot more seasons so having some more milestones would be awesome."

Adnam, 25, was a star at junior level and he worked his way into development spots with Adelaide and Illawarra as a teenager earning a few NBL appearances.

Joining Melbourne United for the 2015-2016 season was the turning point, as late that season he was able to earn big minutes when the team rested some starters for a clash with the Breakers in Auckland.

"That was a big game for me in terms of confidence and knowing I could take what I could do at lower levels and transfer it to the NBL," Adnam said.

"I knew I belonged and my teammates gave me so much confidence after that game."

The next season he would play 20 games, the season after 30 games as a back-up point guard in Melbourne United's NBL title win.

Last year he joined the Sydney Kings and was among the best back-up point guards in the NBL, then the Phoenix came calling with the chance to come home.

Adnam has loved every minute playing alongside previous club mates and the location means he can do things like duck out to Lilydale to have his mum give him a haircut.

"No-one cuts hair better than my mum – I'm happy to have her just down the road," Adnam told The Age on Friday having just hopped out of the hairdressing chair.

"Coming to the Phoenix has been a breeze. I have connections with Simon Mitchell and others, with [head of performance] Eric Hollingsworth, people who know my journey and my body."

The Phoenix feature of host of guards led by import John Roberson and veteran stars Adam Gibson and Ben Madgen plus shooter Kendall Stephens, but Adnam has proven a good foil alongside them.

"It looks quite clogged in terms of talent but our balance is good – it's one of our greatest advantages," Adnam said.

The Phoenix have made an impressive 4-2 start and face a Breakers side desperate for a win after falling to 2-5.

The Breakers also feature US teenage point guard RJ Hampton, who at 196-centimetres is touted to be a top-10 pick in next year’s NBA Draft. Adnam is listed at a generous 186-centimetres and 85 kilograms, up at least 10kg from his first NBL season.

"You see these point guards in the modern NBA who are six foot seven, Ben Simmons is six foot 10 – it's cool to see that and you feel that athleticism when they are on the floor," Adnam said.

"But one thing in the professional environment is that you have to have a high IQ. Their athleticism is incredible so you have to try and outsmart them.

"At this club it doesn't matter if they are young kids or veteran point guards, we will take it to them either way."

The Phoenix host New Zealand Breakers at Melbourne Arena on Saturday at 5.30pm.