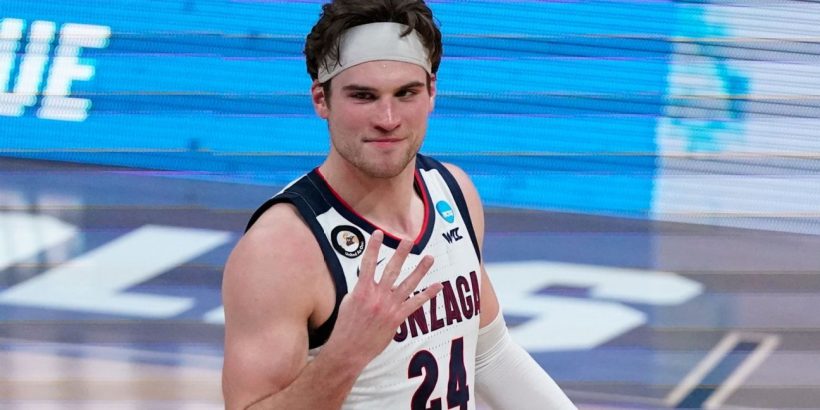 The 2021 Final Four is here in men’s college basketball, and it’s dominated by heavyweights and historic programs. Even in an NCAA tournament in which Cinderellas received plenty of the spotlight, the penultimate and ultimate stages will feature two teams that were talked about all season long — the Gonzaga Bulldogs and the Baylor Bears — as well as Houston Cougars and UCLA Bruins squads that have had hoops greatness written into their DNA for decades.

As the game takes a breath before Saturday’s Final Four, ESPN.com’s panel of Myron Medcalf, Jeff Borzello, John Gasaway and Joe Lunardi discusses the seeming matchup of destiny that has been Gonzaga vs. Baylor; the biggest obstacles in the path of the 2020-21 campaign’s top two programs; the Final Four coach who has done the best job this season; and the oddities of an event played amid the realities of the coronavirus pandemic. Follow this link for Saturday’s Final Four tip times, and visit here to check your March Madness bracket or second-chance March Madness bracket.

With apologies to Houston and UCLA, we’ve seemingly been trending toward a Gonzaga-Baylor national championship game since November and probably before. As you look at the Final Four matchups, what is the single biggest threat to a Zags-Bears meeting on Monday night?

Medcalf: I think history is the greatest threat for Gonzaga. Once the NCAA expanded the field in 1985 and put six games between a team and the national championship, no team has entered the event with a perfect record and left with one. The 1975-76 Indiana team’s perfect season unfolded just a year after the field had been expanded to 32 teams. That was 45 years ago. Then Larry Bird ran into Magic Johnson in 1979. The 1990-91 UNLV squad had destroyed ranked teams that season before losing to Duke. It seemed invincible. Wichita State had an uphill climb with Kentucky waiting for it in the second round in 2014. But the 2015 Kentucky squad was a juggernaut. All of them lost.

Tuesday’s effort by Gonzaga suggests there might be a gap between the Bulldogs and the remaining teams, even Baylor, although the Bears have offered plenty of evidence they can win that game if it happens. Houston just keeps neutralizing opponents. And the UCLA run, capped by a win over Michigan in the Elite Eight? Wild. All three teams can be dangerous. Over 45 years, however, others like Gonzaga have reached this point. And it just didn’t happen. Gonzaga might be different. But they’re fighting history — and the teams standing in their way.

Borzello: I’d say Houston’s offensive rebounding. The Cougars are the second-best offensive rebounding team in the country and they absolutely destroyed Oregon State on the glass in the Elite Eight, getting second-chance opportunity after second-chance opportunity against the Beavers’ zone defense. Baylor doesn’t have too many weaknesses, but one of them is the Bears’ defensive rebounding issues. They finished eighth in the Big 12 in defensive rebounding percentage and they’re in the bottom 100 nationally in that category. I don’t think Houston is going to be intimidated by Baylor on Saturday night; the Cougars are physical, tough and don’t expect to win pretty. If they can dominate the glass, they’ll have a shot at ruining the Gonzaga-Baylor dream matchup.

Gasaway: The biggest threat to a Gonzaga-Baylor title game in my view is a Bears opponent that doesn’t commit turnovers. Since we’re down to just one possible BU opponent in between Scott Drew’s team and the winner on the other side of the bracket, that burden falls to Houston. Baylor has forced the likes of Wisconsin, Villanova and Arkansas to commit many turnovers. That’s impressive, because all three of those teams took excellent care of the ball during the regular season. If an opponent ever did shut off that valve, however, it would make a measurable difference for the Bears. On “effective” (turnover-less) tournament possessions, Baylor is outscoring its opponents by a much smaller margin.

Lunardi: Ten years after VCU pulled its “First Four to the Final Four” heroics, UCLA has repeated the feat and will be the latest to challenge the Gonzaga juggernaut. The Bruins have absolutely no business knocking off the Zags and preventing a Bulldogs-Baylor championship game, but we’d have said the same thing before any of UCLA’s five improbable wins in this tournament.

Mark Few, Scott Drew, Kelvin Sampson and Mick Cronin are your Final Four coaches. The debate on who has the best team might be too easy, so which of these four gentlemen has done the best job in 2020-21?

Borzello: Hard to go against Mick Cronin right now in terms of March performance. The Bruins lost Chris Smith, arguably their best player, to a torn ACL. Jalen Hill has been out for personal reasons. They looked lost over the final few weeks of the season, losing four in a row before the NCAA tournament. And then they were left for dead after getting down by 13 in the first half to Michigan State in the First Four. They haven’t lost since, and they’ve looked in control for most of the last 165 minutes of basketball.

Cronin had questions facing him when he took over the UCLA job: How would he, a Midwest guy through and through, adapt to Los Angeles? How would his brand of basketball — physical, grueling, half-court basketball — adapt to a fanbase expecting fireworks and five-stars? He’s answered those questions. Less than two years after being hired, Cronin has the Bruins in the Final Four.

Lunardi: Bobby Knight was the Coach of the Year in 1976 when Indiana completed the last undefeated national championship season. With or without that distinction in 2021, Gonzaga has dominated the sport unlike any team since UNLV in 1990-91. Mark Few built these Bulldogs and has them playing at a ridiculously high level. That screams “did the best job” to me in every way it can be said.

Medcalf: Mark Few didn’t reach his first Elite Eight until his 16th season as a head coach. Kelvin Sampson did it in his 15th season as a Division I head coach. Scott Drew pulled it off in his seventh season. It took Mick Cronin 18 seasons and three schools to achieve that feat. Now, he’s led UCLA back to the Final Four. This run has been nothing short of magical. If anyone doubted the initial start on this run, it’s impossible for them to deny the value of wins over Alabama and Michigan, two teams that entered the NCAA tournament will legit Final Four aspirations. It doesn’t matter what happens next. Cronin is certainly the most impressive coach in the mix right now. This is one of the most remarkable turnarounds we’ve seen in college basketball history.

Gasaway: I thought Juwan Howard was college basketball’s coach of the year in 2020-21, and was on his bandwagon from day one. I’m jumping off now, not just because Michigan isn’t here but because I’m not sure we’re fully comprehending just how well Gonzaga is playing.

As my colleague Mr. Borzello put it well during the regional final, USC was unable to so much as lay a glove on the Bulldogs. And we are talking about a Trojans team that beat Kansas by, what, 816 points, right? It’s wild, and when a team is this close to doing something we haven’t seen in 45 years, we run the risk of future archaeologists thinking we were inept when we didn’t give Mark Few some form of recognition. Plus, the guy has built this program to the level where it is today. (Yes, Dan Monson, Mike Roth and Dan Fitzgerald all had a hand in this miracle too.) Few has my vote.

Apart from the basketball — which has been pretty good! — this has been an undeniably unusual tournament played under the most unique circumstances in the sport’s history. What are you going to remember most about the pandemic tournament?

Medcalf: I’m going to remember how these reduced crowds at Lucas Oil Stadium, Bankers Life Fieldhouse and Hinkle Fieldhouse screamed for two hours to cheer their teams on. No, it has not sounded like a typical NCAA tournament crowd. But there was still an atmosphere. And college basketball has largely been missing that atmosphere for at least a year. After leading Houston to the Final Four on Monday, Kelvin Sampson saw some of his friends up in the stands and threw up his hands to acknowledge them. It was a cool moment in a tournament that has had a few odd moments. While we’ll definitely appreciate more traditional arrangements in the coming years, everyone involved made this feel real in 2021. Different, yes. But still real. Not sure we could have imagined that a year ago.

Gasaway: I will remember that there were zero complaints about where a team was playing because every team was playing in the same spot: Indiana, and, usually, Indianapolis. That was nice, and it was peaceful to see an entire vein of controversy simply disappear. The thing I did not like, conversely, was never knowing what day it was. To not have the round of 64 start on Thursday at noon Eastern and to not have the round of 32 start on Saturdays confused me thoroughly in ways that extended outside basketball. I for one will be happy to return to the old familiar schedule, let us hope, in 2022.

Borzello: Walking from one side of Lucas Oil Stadium to the other side and watching two different games separated by a curtain in the middle of the stadium. It’s a weird deal, man. The unique logistics of this entire tournament — from the single location, to the change in tournament schedule, to the standalone Sweet 16 games — have been the most memorable aspect of the last three weeks. Of course, there’s Max Abmas’ performance and Alex Reese’s shot and Gonzaga’s general dominance, but the uniqueness of everything has really stood out to me.

Lunardi: Gonzaga’s historic excellence, and the fact that there were no major complaints on Selection Sunday. Maybe we were just so doggone glad to have the tournament back that we didn’t nitpick the 68-team field. Maybe the pandemic-altered season gave everyone some necessary perspective. Or maybe the Men’s Basketball Committee simply did a marvelous job under inconceivable circumstances. The Committee, along with Dan Gavitt and the NCAA staff, should be remembered for a job well done in both believing that a tournament was possible and then pulling it off.