The undefeated Flyers have taken the WNBL by storm in the opening rounds of the season and Mitchell is revelling in the team's up-tempo style, which brings out her best traits of pushing the ball, making good passes and knocking down three-pointers.

Last season Mitchell helped lead the Capitals to a WNBL championship before moving back to Melbourne. 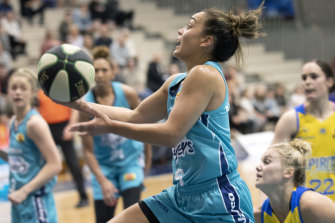 Leilani Mitchell on the way to two points. Credit:Mick Connolly

She and the Flyers (6-0) will host the Capitals (3-2) on Thursday night, looking to remain undefeated heading into the break for the FIBA Olympics pre-qualifiers.

"We are not looking past Canberra as they are still the defending champs and still a great team," Mitchell said.

"They've had some losses but you can chalk it up to a bad weekend, and we know they will come in here hungry to prove themselves as well."

No one has been able to slow the Flyers, who have maintained their style by starting Opals captain Jenna O’Hea and Sara Blicavs together despite neither being a true power forward.

But the Capitals have versatile power forward Kelsey Griffin and centre Marianna Tolo, who are both Opals stars, both strong in the paint and athletic enough to run with Blicavs and O’Hea.

WNBA import centre Mercedes Russell has been dominant inside for the Flyers and allowed for O'Hea and Blicavs to run rampant.

"There is not that many big fours [power forwards] in Australia so in order to be successful you have to have that agile, athletic four," Mitchell said.

"You see why Kelsey has been so successful as she is so athletic and mobile. Jenna does that as well but her biggest strengths are her shooting and smarts and the way she understands the game.

"It's such a relief, so much fun and makes my job so much easier to have a four, who has so much of the offence run through her as she makes the right decisions out there."

In recent weeks the likes of Blicavs, Russell and Bec Cole have all made bigger impacts as they find their places within the offence, so all three will be pivotal along with Mitchell, O’Hea and speedy guard Aimie Clydesdale.

Canberra's French import guard Olivia Epoupa is also fast finding her feet, leading the WNBL in steals with over four per game and remaining a threat on offence.

"She is quick, athletic and brings that up-tempo style they love to play," Mitchell said of Epoupa.

"It's nice to see the WNBL bring in some European players as it adds a new dimension to the league and Canberra's benefiting from having her there."