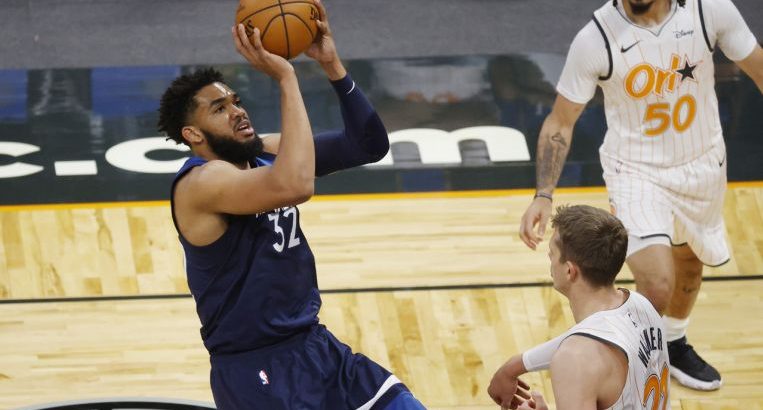 LOS ANGELES (AFP) – Karl-Anthony Towns scored 27 points to lead the Minnesota Timberwolves to a 128-96 rout of the Orlando Magic on Sunday (May 9), then lifted the lid on how emotional it is for him to play on Mother’s Day.

“I have been emotional all day,” he said. “I told my dad it will be very difficult to come out here. But my family, my memories and this team gives me strength to come out here and play the game.

“It is difficult, but to all the mothers out (there) that hold the house down, and all mothers not here any more… today is for you. Happy Mother’s Day. There is no bigger job in the world than a mother.”

He spent the day with his father Karl Towns Sr, and the two shared a touching embrace at courtside before Sunday’s victory in Florida.

“It’ll be emotional. But it’ll be rewarding because she’ll be happy to know we’re still doing the stuff that she would want us to do,” Towns Sr told USA Today ahead of the game.

Towns has lost not only his mother, but also six other family members over the last year to the coronavirus, before testing positive himself in January.

On Sunday, he and D’Angelo Russell both finished with 27 points to snap a three-game losing streak for the Timberwolves (21-47), who are third bottom in the West.

The Mavericks won their fourth consecutive contest in the second game of a home-and-home series to improve to 40-28 on the season. They are in fifth place in the Western Conference with four games left in the regular season.

Doncic was ejected just under two minutes into the third quarter for fouling the Cavs’ Collin Sexton as the two tussled at the side of the basket. Sexton appeared to push Doncic, who swung his arm backwards, striking Sexton near the groin area.

“I hit him. It wasn’t nothing on purpose. That kind of stuff happens all the time in the games,” the Slovenian said.

Dallas was already playing without Latvian Kristaps Porzingis, who has missed six straight games and nine of the past 10 with a sore right knee.

Meanwhile, the New York Knicks showed why they are headed to the post-season as Derrick Rose scored 25 points in a 106-100 win over the Los Angeles Clippers.

The Knicks used a combination of well-executed perimeter shooting and solid defence to break down Los Angeles and bust the game open in the second quarter before holding on in the fourth for their third win on a six-game road swing.

The Knicks also have two losses on the road trip, which closes on Tuesday against the reigning NBA champions Los Angeles Lakers, with both having identical 38-30 records.

Rose came off the bench to deliver eight assists, while Reggie Bullock scored 24 points and made five threes for the Knicks, who have four games left in the season and all against clubs headed to the postseason.

“He’s got to continue to do that for us, it opens up so many things.”

Also, Anthony Davis finished with 42 points and 12 rebounds as the Lakers dominated the Phoenix Suns 123-110 in the late game in Los Angeles.

Los Angeles avoided the three-game season sweep by the Suns and stayed one game behind the Portland Trail Blazers for the seventh spot in the Western Conference standings with four games left.